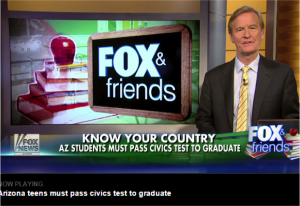 Arizona recently passed legislation requiring all high school students to pass the test required for naturalization as a US citizen. About a dozen other states are considering similar bills. Some of my friends are supporters, and the idea seems attractive for several reasons. It sounds like a way to strengthen civic education, and it subjects native-born Americans to the same test we require of immigrants, which may seem just.

I am nevertheless against the idea. First, I am worried that the time allocated to civics will shrink as a result. After all, this is an easy test. You can see all the questions and answers in advance. It takes a matter of hours to study for it. People who do not read English still memorize the answers and pass it, without comprehension. If passing this test comes to be seen as adequate preparation for citizenship, there will be no reason to spend a semester on civics, for the demands on math and science are much higher.

Importantly, more than 90% of US high school seniors have spent a semester in a civics course. They have also spent a year on US history, which is actually the topic of most questions on the naturalization test.

That brings me to a bigger objection. Requiring a single, short test of concrete factual knowledge in civics would be a step forward if most kids never faced such a test. But at least 90% of students do face regular testing that is quite a bit more demanding than the naturalization exam. If you take a US history sequence and an American government course–as most students must–then you are tested, at least by your teacher and, in many cases, also by the state.

If our problem were a total neglect of civics, then we might begin by requiring a simple test. But that is not the situation.

Instead, one major problem is that we do not take the time to teach (nor assess) the deeper and more demanding civic skills that we really need–such skills as following and interpreting a complex current issue, or advocating in a court or legislature, or developing an argument for a public policy. These are the kinds of outcomes that tend to be missing from state assessments. I don’t see how a new test like Arizona’s will increase the time or effort spent on learning these skills. I can see us spending less time if adequate performance on civics comes to be equated with passing the naturalization test.

The other problem is that adult Americans don’t know basic facts about the political system. According to today’s New York Times story about civics, “A survey last year by the Annenberg Public Policy Center at the University of Pennsylvania found that more than a third of respondents could not name a single branch of the United States government, while fewer than a quarter knew that a two-thirds vote of the House and Senate is required to override a presidential veto.”

But most of these adults had to study precisely these topics in school and faced tests on them. So the problem is that they don’t remember the concrete factual information (much as I have forgotten my high school chemistry). Now, why would they forget these facts? I would posit: because they have not formed habits of actively engaging with news and current events. You will remember the branches of the government if you are interested in President Obama’s current tensions with the Republican Congress. If you don’t follow such news, you can easily forget what you crammed for in 11th grade civics.

Thus the second problem is really that civics is often boring. It doesn’t inspire interest that will continue after the test. And again, I don’t see how the Arizona legislation will address that problem, but I can see it making it worse.