Northeastern political scientist Nick Beauchamp has developed a remarkable, free tool (Plot Mapper) that identifies keywords in a stream of text and plots them on a two-dimensional plane. The words are placed automatically but meaningfully (using a form of principal components analysis), and a line traces the order in which the ideas unfolded over time.

Beauchamp’s analysis of the 2015 State of the Union was covered in the Washington Post. He demonstrated the neat arc of the president’s rhetoric:

I wanted to try the tool, so I looked around for another recent speech that might contrast with the SOTU. Sarah Palin’s Iowa speech has been widely panned on the right as well as the left, being called a “tragedy”–or at least “an interminable ramble.” I pasted the text into Plot Mapper and this is what I got: 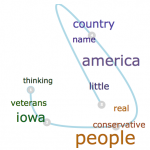 I actually think the quality gap between these two texts is a little obscured by this form of analysis. “America,” “country,” and “people” seem to play similar roles in both speeches. We also see an actual organizing structure to Palin’s words: she moves from nationalism through right-populism (real people are conservative) to conclude with the local (veterans in Iowa). Finding such an arc may be giving the speaker a bit too much credit. Nevertheless, the tool has enormous potential for comparing discourse. I’d be especially interested in using it to analyze how people affect each others’ ideas when they deliberate.