A 10-minute talk of mine summarizing my argument.

The traditional civil society of the United States is in deep decline, as exemplified by these trends: 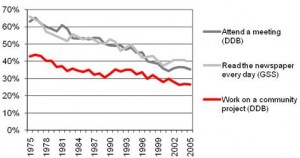 I have tried to contribute through my practical work with organizations like Common Cause, the National Commission on Civic Renewal, the Tisch College of Citizenship and its community partners in Medford, Somerville, and Boston, AmericaSpeaks, Street Law, the Newspaper Association of America Foundation, the Campaign for the Civic Mission of Schools, the Kettering Foundation, the American Bar Association Committee’s for Public Education, the Paul J. Aicher Foundation, and the Deliberative Democracy Consortium.

I also try to produce helpful scholarship as director of CIRCLE, The Center for Information and Research on Civic Learning and Engagement and in my own writing. My work on civic renewal includes the following publications. (Please see also separate pages of publications specifically devoted to civic education and the Internet.)

We Are the Ones We Have Been Waiting For: The Promise of Civic Renewal in America (Oxford University Press,  2013)

“As America has wallowed through an unprecedented decline in civic engagement, Peter Levine has been a lighthouse warning of the dangers of civic alienation. Now, he makes the encouraging case that although we will live for a while with the consequences of past mistakes, the worst of the storm is over.  Professor Levine concludes with ten common sense strategies that can energize the people and their governmental institutions while preparing a new generation of Americans with the values and competencies to sustain our reinvigorated democracy.”
–Bob Graham, United States Senator (1986-2004)

“Peter Levine is a remarkable asset–a scholar whose research is rigorous and unflinching but whose passion for democracy brims with optimism and engagement.  In We Are the Ones We’ve Been Waiting For, Levine catalogues all the ways our institutional systems discourage engagement among citizens.  But he finds and lifts up a million people doing civic work for a better world, and asks us to join and harness that energy for real change.  It’s clear-eyed and a clarion call–and a must read whether you’re a full time advocate or ‘just’ a citizen hoping to make a difference.”
–Miles Rapoport, President, Demos

“We know what it means to get better leaders.  But how are we supposed to produce better citizens?  That’s the question Peter Levine brings into focus. If the examples he describes can spur the one million most active citizens into a movement for civic renewal, we will all benefit from communities that are more deliberative, more collaborative, and more engaged.”–Alberto Ibargüen, President and CEO, the John S. and James L. Knight Foundation

“In an America now rife with inequality, institutionalized corruption, a jobless recovery and more prisoners than any other country, many sense that we stand at a nadir of democracy. With inspiring erudition, Levine points to an unlikely solution: the people themselves. Drawing from experiences in schools from Washington, D.C. to neighborhoods in San Antonio, he develops a pragmatic approach to civic revitalization that builds upon developments in organizing, deliberation, civic education, and public service, but goes far beyond any of these to reach for an ambitious vision of participatory democracy. He asks us to join the emerging civic movement he describes, and we all should.”
–Archon Fung, Ford Foundation Professor of Citizenship and Democracy, Harvard Kennedy School

The New Progressive Era: Toward a Fair and Deliberative Democracy (Rowman & Littlefield, 2000)

“Peter Levine’s new book represents an important new voice in our national deliberations about how to revitalize American democracy. It is a thorough, thoughtful account of the contemporary relevance of the ideas and innovations of the Progressive Era and a persuasive case for a new progressive agenda in American politics.”– Prof. Robert D. Putnam, Harvard University

“Some books you read and put aside. Others you send to friends; this is one of those books. Peter Levine brings a rich historical and philosophical perspective to an immediate and practical question: What is going to be the effect of all the effort that has gone into civic renewal in the last decade? What it will take to make democracy work as it should will be an especially pressing issue in the 2000 elections. Americans are already frustrated by a political system where money, rather than people, seems to do the voting. This book speaks to everyone from journalists to foundation executives to teachers to members of civic organizations–all citizens. Don’t miss reading it.”

(Please see separate pages for my articles on (1) youth engagement and (2) the Internet and new media.)

“The Pope and Civic Studies:  A Reply to Harry Boyte,” The Good Society (in press)

“Democracy in the Digital Age,” first chapter in The Civic Media Reader, edited by Eric Gordon and Paul Mihailidis, MIT Press (in press).

“Practice and Theory in the Service of Social Change,” in Margaret Post, Elaine Ward, Nicholas Longo, and John Saltmarsh (eds.), Voices of the Next Generation of Engagement (Stylus, in press)

“Civic Engagement” in Emerging Trends in the Behavioral and Social Sciences, edited by Robert A. Scott and Stephen M. Kosslyn (John Wiley & Sons, 2015)

“You Can Add us to Equations but They Never Make Us Equal: Participatory Budgeting in Boston,” Transformation, August 4, 2014

“Civic Engagement,” in Robert A. Scott and Stephen M. Kosslyn, (co-editors), Emerging Trends in the Social and Behavioral Sciences, SAGE Publications (in press)

(I drafted the text, but the official authors are CIRCLE, Civic Enterprises, National Conference  on Citizenship, Saguaro Seminar, and the National Constitution Center), Civic Health and Unemployment: Can Engagement Strengthen the Economy? (2011)

“America’s Civic Health Index,” 2008, published by the National Conference on Citizenship in partnership with CIRCLE and the Saguaro Seminar. I was one of several authors and drafted the original text.

“America’s Civic Health Index,” 2007, published by the National Conference on Citizenship in partnership with CIRCLE and the Saguaro Seminar. I was one of 12 authors and drafted the original text.

(With Mark Hugo Lopez and others), “The 2006 Civic and Political Health of the Nation” (CIRCLE, based on a nationally representative survey.)

Broken Engagement: America’s Civic Engagement Index, A report by the National Conference on Citizenship in association with CIRCLE and the Saguaro Seminar (September 18, 2006): with 12 co-authors, but I was responsible for the data and quantitative analysis.

(with David Brown and Robert Kingston) “What is ‘Public’ About What Academics Do? An Exchange with Robert Kingston and Peter Levine,” Higher Education Exchange, 2004 pp. 17-29

“The Idea of an Engaged University,” an interview of me by David Brown, Higher Education Exchange, 2003

“The Legitimacy of Labor Unions,” The Hofstra Labor and Employment Law Journal, vol. 18, no. 2 (Spring, 2001), pp. 529-573. This is forthcoming in Chinese translation in Global Law Review, a quarterly law journal published by the Institute of Law, Chinese Academy of Social Sciences

“Public Intellectuals and the Influence of Economics,” The Higher Education Exchange, 2001

“Lessons from the Brooklyn Museum Controversy,” Report from the Institute for Philosophy and Public Policy, vol. 20, no. 2/3, Summer 2000

“Getting Practical About Deliberative Democracy,” The Report from the Institute for Philosophy and Public Policy, Fall 1999

“The Index of National Civic Health (INCH),” a publication of the National Commission on Civic Renewal (1998). INCH used 22 variables to measure a steep decline in civic health since 1974; the results were widely reported in newspapers.

“Expert Analysis vs. Public Opinion: The Case of Campaign Finance Reform,” The Report from the Institute for Philosophy and Public Policy, summer, 1997. This article is anthologized in Social Problems, twenty-seventh edition, edited by Kurt Finsterbusch (McGraw Hill-Dushkin, 1999). A shorter version was published as “Cleaning Up Campaigns,” The Birmingham News, “Review & Comment” section, Sunday, August 17, 1997, p. C 1

“Deliberation and Technical Reasoning,” a chapter in the Standing with the Public: The Humanities and Democratic Practice, edited by Noelle McAfee and Jim Veninga (Dayton, 1997)

“Public Journalism and Deliberation,” Report from the Institute for Philosophy and Public Policy, winter, 1994. This article was reprinted in Theodore Lowi, et al., Readings for American Government (Norton, 2000)

“Consultants and American Political Culture,” Report from the Institute for Philosophy and Public Policy, summer/fall issue, 1994 This article was abridged in The Congressional Quarterly Researcher (1996)