Medford/Somerville, MA – The National Study of Learning, Voting, and Engagement (NSLVE) at Tufts University’s Jonathan M. Tisch College of Civic Life today released an analysis of the voting patterns of millions of college students, examining voter rates by region of the country, field of study, and type of institution.

These findings, based on a first-of-its kind study of the voting records of 7.4 million students at 783 higher education institutions, could inform opportunities for political learning and outreach on campuses in 2016 and beyond.

Major research findings from this study include:

“These findings suggest considerable disparities across disciplines, and university leaders should take notice,” says Nancy Thomas, Director of the Institute for Democracy & Higher Education at Tufts University’s Tisch College, which runs the NSLVE study. “The fact that education and humanities majors vote at significantly higher rates than their peers in the STEM disciplines has both policy and political implications. We know that young people who engage in civic life early on develop lifelong habits. Regardless of their chosen field, all college and university students should be educated for democracy.”

The Institute for Democracy & Higher Education will be using NSLVE data to examine important factors in campus political learning and voting during the 2016 election and beyond. 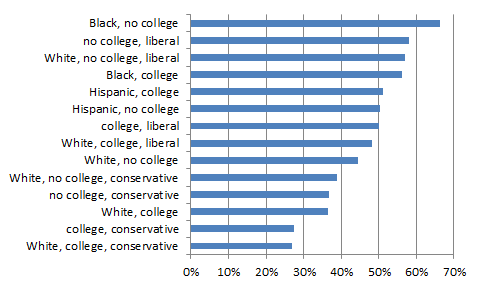 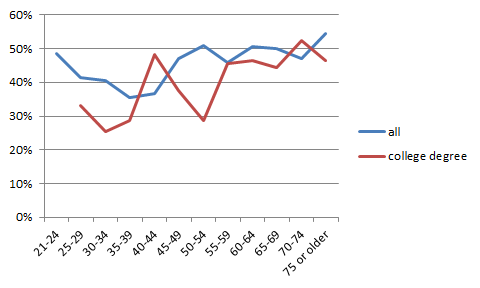 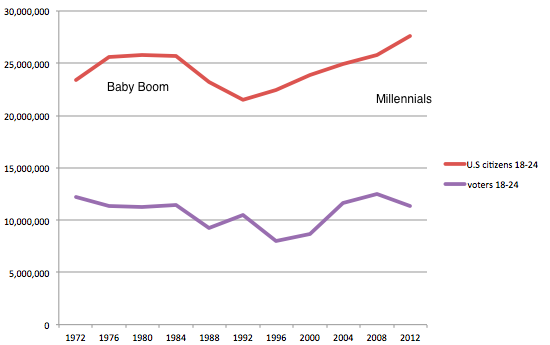 I am enjoying Elizabeth McKenna’s and Hahrie Han’s book Groundbreakers: How Obama’s 2.2 Million Volunteers Transformed Campaigning in America in preparation for this free open forum in Chicago on May 19. Register here.

If we set aside the invidious motivations for–and the details of–the Indiana Religious Freedom Restoration Act, it does raise some fairly complex constitutional questions. Here are five theories that one might adopt in response:

1. The law should ban private discrimination on the basis of sexual orientation. To deny a regular service to a citizen because she or he is gay is hurtful and cruel and reinforces a whole system or culture of domination that also has serious economic and civic consequences. Therefore, such discrimination can and should be banned.

I endorse the whole premise. The questions are (a) whether the state and law are the appropriate instruments for remedying this problem, and (b) whether a conflicting interest (religious freedom) should be given any weight. We must allow individuals to do some things that we are certain are bad and wrong in order to limit government in the interest of liberty. It is not a free society that permits only good actions. Not any liberty counts, but the establishment and free exercise of religion are two explicit freedoms named in the First Amendment. To deny their relevance not only ignores the constitutional text but suggests that other forms of religious discrimination should also be illegal–for instance, that the Catholic Church should be required to ordain women. This seems a problematic implication.

I endorse some of this argument, but a lot rests on the definition of religion. It seems unjust to give special rights to people who believe in the existence of one or more deities. Just yesterday, the First Church of Cannabis declared its interest in selling marijuana in Indiana under the protection of the Religious Freedom Restoration Act. Why not? Also, this approach will involve the state in inquiries into religious doctrines and traditions. Is it really wise to ask a secular court to decide whether, for example, discrimination against gays is rooted in the Talmud or in some specific Protestant tract?

3. Jacob Levy’s suggestion: “private businesses should be free to refuse customers, subject to two categories of exceptions: (a) if the firms are common carriers or (in the common law sense) public accommodations rather than ordinary private retailers and (b) in the United States, due to the constitutional and historical distinctiveness of Jim Crow and its melding of public and private discrimination, discrimination on the basis of race.”

This is a more libertarian view, more protective of individuals’ rights to choose their own contracts and relationships. It carves out a special exemption for racial discrimination in the US. (Levy teaches in Canada and is thinking about these issues globally.) I am not hostile to his position, because liberty is a very high principle and because the state is not our only instrument for changing private behavior. I would also agree that race is a unique case in the US. But a lot hangs here on the seriousness of discrimination based on sexual orientation. It’s easy for me–a straight man–to write as if religious freedom can simply be balanced against equality. If I were gay and denied a service on that basis, I would probably feel that my very personhood had been assaulted, not merely as an individual act but as part of a system or culture of oppression that also costs lives. Homophobia is a deadly problem, and perhaps the state should intervene even in private contracts to address it.

4. Forbid discrimination in certain kinds of business. Levy hints at this kind of solution when he mentions “public accommodations,” about which there is a large body of case law, legislation, and scholarship. The basic idea is that McDonald’s should be forbidden from discriminating on the basis of sexual orientation (both in hiring and in service), because it operates a mass, transactional enterprise. You pay your money; you get your burger and fries. But Elane Photography (a small New Mexico business) is not running a public accommodation. A more-or-less solo photographer may choose whom to photograph. If she chooses only to photograph opposite-sex weddings, that is allowable under the First Amendment.

I find this distinction somewhat helpful, but there is no bright line between Elane’s and McDonald’s. Furthermore, the mere fact that Elane is a small business does not make its discrimination any less hurtful.

5. Honor the small-r republican principle that the people should govern themselves by deliberating and making law. Let the people decide whether or not to ban discrimination.

I am a small-r republican and believe that collective political freedom is too often overlooked. But who is “the people?” You will get very different laws if Bloomington can decide, if Indiana decides, or if Washington takes up the issue (and probably deadlocks, leaving the status quo in place). Also, the most important reason to restrain the rights of the people to govern themselves is to protect individuals’ rights. But then again, both non-discrimination and free exercise are individual rights. The republican principle doesn’t say which one should trump popular rule.