The situation involving Greece and the European Union is a complex game, with numerous players and potentially many phases. Just as an example, voters in Spain are players who will have a chance to choose the new government in December; they may opt to support Podemos, the relatively left-wing Spanish party, if they think that the Greeks did well by choosing Syriza last week.

There are principles on both sides. My sympathies lie much closer to Syriza, on the grounds that: austerity is generally bad economics; Greek residents count for as much (morally) as Northern Europeans; and the Greek meltdown, although abetted by poor national governance, was mainly a consequence of neoliberal economic policies driven by Germany and other Northern economies in their interests. However, a German Christian Democrat or a British Tory could make a sincere case against leniency, based on moral hazard, the virtues of fiscal responsibility, Greeks’ responsibility for Greek debt, and other such arguments.

My suggestion of the day is based on Getting to YES: Negotiating Agreement Without Giving In, the 1981 best-seller by Roger Fisher and William L. Ury. It is a popular and breezy book but based on some serious analysis. Fisher and Ury present two forms of positional bargaining in this table: 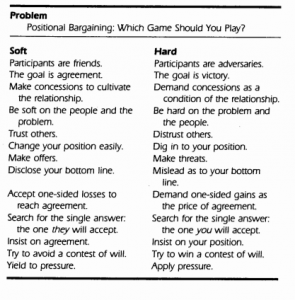 In this case, Mr. Tsipras could opt to be hard or soft in his approach to the European Central Bank and other key European players. Fisher and Ury would predict that either approach will yield a bad outcome for Greece and for Europe as a whole, because people have systematic weaknesses that make positional bargaining go badly, whether the players opt to be nice or tough. By the way, that prediction holds even if Mr. Tsipras is completely correct on all matters of principle: this is a game, not a seminar.

Instead, Fisher and Ury propose “negotiation on the merits,” which has four key features:

There is much more in the book, but this offers a flavor.