(Waterville, ME) Last week I saw a display that is exemplary of Simon Denny’s work. Inside a case made of server racks and glass panes are three-dimensional versions of the NSA graphics displayed in the PowerPoint presentations that Edward Snowden leaked. For instance, a slide depicting military vehicles crossing barriers has been turned into a diorama made in part of hobbyist models. A slide showing “The 5 Team Dysfunctions” has been turned into a three-dimensional pyramid with levels labeled with phrases like “Lack of Accountability” and “Lack of Results.” For another installation that I didn’t see, Denny actually used a stuffed eagle that he bought from a taxidermist to illustrate the eagle on the NSA’s shield. Lights flicker on the servers. The whole object is neat, shiny, hermetic, and strange.

For the Venice Biennale, Denny’s NSA displays were exhibited in the Renaissance Library of St. Mark (the Biblioteca Marciana), which was originally a storehouse of global knowledge and information for what was then a great mercantile power. The Marciana has held–although not currently–the finest medieval world-map, the Fra Mauro Map (ca. 1450) which compiled intelligence from such emissaries as Marco Polo. Venice sent these feelers into the world and compiled their data for the benefit of her navy and traders.

Here is Denny’s work as displayed in Venice–one empire echoing another across the centuries. Those are portraits of philosophers on the walls, sources of wisdom that might be compared to the gnomic utterances in the NSA slides, such as “Role of the Team Member: Focusing on Collective Impact.” 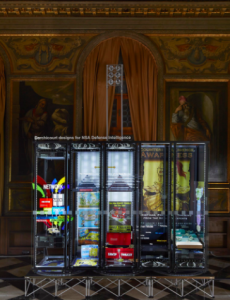 I, however, saw the same display at MOMA, the high-rise museum in the heart of Manhattan’s Midtown that Rockefellers founded to collect the best art of the world for the most powerful commercial city of its time.

Like much conceptual art, this display poses questions. I value that function, although I also think the appropriate response to a question is an answer. So, standing before Denny’s display and thinking about my own responses, I believe I’d say: As an organization, the NSA resembles a large bureaucratic for-profit firm, at least in its internal rhetoric. Its rhetoric is banal. A highly self-conscious, polished, ironic representation of that banality is art.

ThE NSA collects lots of information without people’s permission. It is part of the United States government, which is owned by the American people. The Agency also affects people around the world. The people who own it and the people whom it affects have a right to understand how it works. Understanding it includes having some kind of grasp of its internal culture, including its banality.

Then again, it is probably both necessary and even valuable for a nation to spy, so long as its foreign policy is reasonably just. To spy in the modern world is going to require an organization that resembles a large bureaucratic for-profit firm, and running such an operation reasonably efficiently may require banal slogans. (I’m not sure about that.)

By the way, the original artist who created many of the NSA’s graphics is David Darchicourt. He gets an odd sort of billing in Denny’s subversive Art-World response. Fortunately, Darchicourt seems good-humored about the whole thing. Ryan Gallagher reports:

Now he is the unwitting central character in a new exhibition that puts the spotlight on the spy agency’s imagery. … He admits he finds it interesting to see his designs in the Renaissance setting. “It’s kind of flattering, but it’s also kind of creepy,” Darchicourt says, adding that he’s now considering deleting some pictures from his online portfolios to prevent them from being used by anyone else in the future. “Anything that has to do with the NSA will be removed; it’s old and I don’t really identify with that organization anymore.”

See also: on the moral peril of cliche; cultural mixing and power; on the deep state