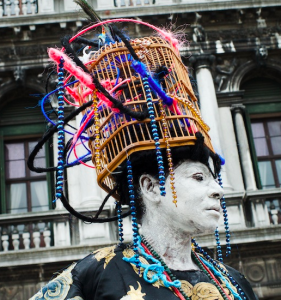 These two objects were juxtaposed during a wonderful Tisch Talk in the Humanities yesterday, with Maria Magdalena Campos-Pons from the School of the Museum of Fine Arts and Lisa Lowe from Tufts’ Department of English.

On the left, an 18th century desk made in colonial Mexico that’s now in the Boston Museum of Fine Arts. Lowe noted that the shape derives from the Northern European Renaissance. The geometric patterns on the outside are reminiscent of Moorish Spain. But, as Lee Lawrence writes, “With the desk flap lowered and the bookcase doors open, … the gold-on-red interior screams China—until, that is, you take a closer look. The artist has depicted a hacienda with palm trees and deer, not a landscape with willows and oxen, and the figures wear sombreros, not conical hats.” Some of the figures appear to be Africans, slaves or freemen.

On the right is a photo of Campos-Pons in the Piazza San Marco, Venice. She is an Afro-Cuban artist with some Chinese-Cuban ancestry. She was responsible for the Cuban Pavilion at the 2013 Venice Biennale, a remarkable installation built partly of bird cages. Here she is dressed in an elaborate costume that has Cuban, Chinese, and Yoruba elements, claiming the piazza as a kind of town crier.

Both objects mix Chinese, New World, European, and African content. Both are made by Hispanic artists of color.

It might seem that power and agency is different in these two cases. Campos-Pons is an internationally recognized and successful artist. She makes images that mix specific cultural elements of her choice, and she is honored for the results. The anonymous (to us) artisans who made the desk combined a specific set of cultural elements because Spain had occupied Mexico and turned its indigenous people into subjects. The Empire also forcibly combined the decorative art of the conquered Mudéjars, Chinese porcelain (via the Manila-Acapulco galleon route), and the cultures of Africans who’d been transported as slaves.

But that contrast negates the creativity and agency behind the beautiful desk. Some person or group chose to make it look as it does. If a Spanish-descended patrón had a lot of say in the matter, he or she had vision and talent. And if a native artisan conceived the object, that person was highly creative and–for all I know–well rewarded. As for Campos-Pons, her ethnic and cultural heritage is due to the same Empire. And now she produces goods prized by powerful patrons: museums, collectors, and foundations. Her clients seek a cultural mix or synthesis, as did the original owner of the desk.

One can push the analogy too far, until it seems to make no difference whether an artist has political and economic rights. Campos-Pons faces different objective circumstances from the maker(s) of the desk, and it’s important to improve all people’s circumstances. Still, we can find agency and artistry everywhere, and often it’s by mixing disparate inheritances that we create the objects that represent us best.

See also: when is cultural appropriation good or bad? and upside-down Foucault