Colleagues and I just ran a mini-experiment in which students at two very different universities held online discussions of the same controversial current issues. Before and after each discussion, we surveyed them to ascertain their social networks within their own class. We assumed that a group of people who discuss issues exhibit three layers of network ties that can change over time:

I am interested in tracking the relationships among these networks, because some patterns seem more desirable than others, and it would be useful to recognize the differences. For example, if people who are popular in social networks receive most of the direct addresses and determine the group’s epistemic network, then the discussion looks like a popularity contest. But if a new idea causes people to revise their opinions of whose views should be respected, that is evidence of learning.

Here is a small illustrative finding from the data so far. Below I show the trajectory of two particular students within the Tufts University discussion thread. Both started off as somewhat less central than average in the class’s social network. At the start of the experiment, Tufts 06 was mentioned by three fellow students as a friend or an influencer, and Tufts09 got one mention. (Below I show the percentage of all mentions, to control for differences in the amount of text at each phase.) 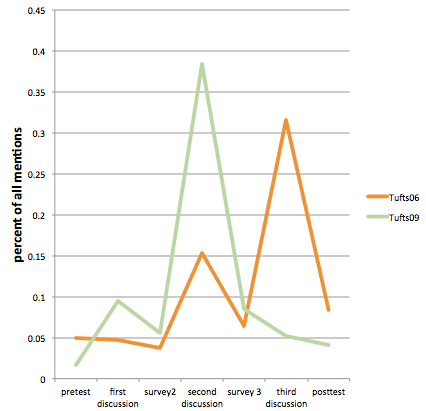 In the second discussion, which concerned the social determinants of health, Tufts09 posted the very first comment. She wrote, “the presentation given by Dr. [F.] was one of the best presentations given on social determinants of health that I have seen. … As a woman of black decent, I have taken these discussions and this knowledge very seriously, and I now view life with a completely different perspective. … When talking about the Flint, Michigan water crisis, it was shocking to hear that companies … are often built where the majority of the community is minority and low income. This infuriated me.”

Her comment was explicitly referred to by five other students and set the agenda for the whole discussion thread. When next surveyed, four students counted her as someone who had influenced them, up from one at the pretest. The number of mentions fell, however, to two at the end of the experiment.

It appears, then, that by making a forceful comment to start an online discussion—drawing on her own identity—Tufts09 may have gained social capital for a week or so. On the other hand, she did not need social capital before the second discussion to be influential in it.

Tufts 06 was the first to post in the the third conversation, writing: “As someone who has suffered from anxiety and depression, the topic of mental health stigma is incredibly important to me. In my family, nearly everyone on my mother’s side is on medication for anxiety, depression, OCD, or some combination of the three. We have had three suicides in our family (all before I was born) just because the treatments and attitudes toward mental health were not sufficient at the time those family members were suffering through their diseases.”

She received six mentions in the discussion thread, and in the subsequent survey, six students named her as influential (up from 3 at pretest). Again, she seemed to raise her social capital by making an influential point in the online dialog.

These are just two little anecdotes, and much remains to be explored. For instance: How typical is this kind of trajectory? Even in these two cases, did participation in the online discussion really cause social capital to rise? (The effect could be random or driven by some other factor.) And if these students were influential, was it because of what they argued, how they drew on their personal backgrounds, or simply the fact that they each posted first on the discussion thread?