pining for the fjords

For the most part, this is supposed to be a professional blog about civic renewal, moral philosophy, and related subjects. However, today I cannot resist recording some of the memories that still fill my mind after two weeks in Scandinavia.

Iceland: I especially recall the southern coast road, two hours of driving on gravel without ever seeing a house, lava fields coated in thin moss on one side of us and the gray Atlantic on the other … Swimming outdoors on a cold, rainy day, because that’s what Icelanders do. A municipal pool, heated by geothermal energy, is a model of Nordic design and a place where people meet to conduct business, steam rising above their bare flesh into the rain. … A nineteenth-century farmhouse (now preserved as a museum). The respectable front parlor is decorated with wainscotting, severe photographic portraits, and a sofa. The parlor door leads to a dirt tunnel that winds past an open fire pit to a kind of bunker where the animals once sheltered in the long winter: a facade of European gentility concealing extreme hardship. 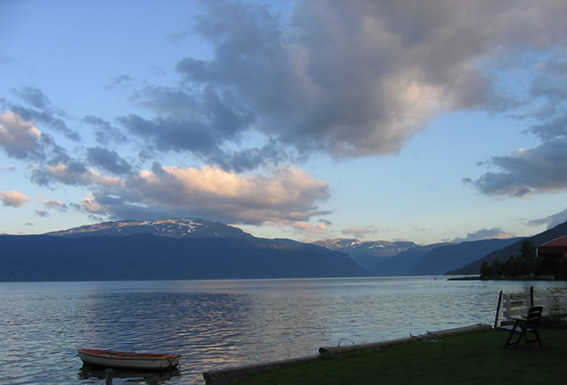 the fjord at Balestrand, Norway

Norway (the best country to live in): The University quarter in Oslo, with its elegant Regency-style buildings and the healthy, energetic, youthful, and stylish crowds on the streets. … The rail lines between Oslo and Bergen, which are what every model railroad enthusiast has ever dreamed of creating in his basement: little trains puffing across bridges, through tunnels, around spectacular wooded mountains. … The view across the fjords from our pension in Balestrand: the sky, the tendrils of fog, the forests, the snow, and the water each form huge swaths of changing color. 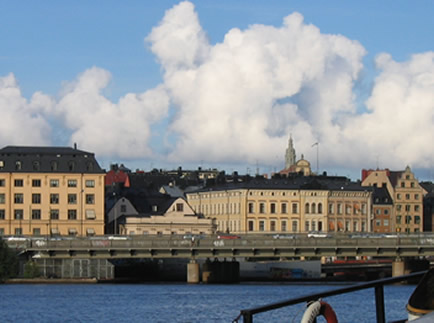 Stockholm: This is a fabulous city with a great variety of neighborhoods and sights that we enjoyed for three packed days. But now what I constantly recall is a variation on the following scene: a large expanse of blue-green waves (the city is built on islands and one-third is under water); a horizontal band of stone and stucco buildings, spires, and Mansard roofs behind some moored pleasure boats; and then a great blue sky with fluffy, scuttling clouds, as in a Dutch maritime painting.

On our way back from Stockholm, we flew over snow-capped Norwegian mountains and the fjords, then landed in Reykjavik after seeing a good view of the geysers at the “Blue Lagoon.” On the second leg, we noticed the Greenland coast below, dotted with huge icebergs. A few hours later, the pilot noted that Manhattan was clearly visible out of the right windows. And then we landed in a steamy Baltimore summer evening. Everyone says that the Internet has shrunk our world, but to me nothing makes it seem as small as a long airplane ride.

This entry was posted in memoir. Bookmark the permalink.