Recently, Jay Rosen asked Austin Bay (“Weekly Standard writer, NPR commentator, Iraq War vet, Colonel in the Army Reserve, Republican, conservative, blogger with a lit PhD”) to guest-blog about the press, the Bush administration, and the war. Bay’s long post provoked a total of 441 comments on Jay’s site and 45 on Bay’s blog (so far). I haven’t read all the comments, but it appears that they generated more heat than light. In particular, there was a lot of passionate discussion of the media’s alleged bias against Republicans, little of which–on either side–seemed particularly illuminating. But Bay’s original essay was interesting, and I would like to address his thesis from a different angle.

Bay proposes that the United States is locked in an “information war waged by an enemy that is itself a strategic information power,” namely, Al Qaeda. The American press has an influence on that war. How it presents the American military, Guantanamo, the Iraqi election, and other key matters will help determine whether people around the world embrace Bin Laden, Bush, or some alternative. And what ideology people adopt is the key question in this “war.”

Meanwhile, the Bush Administration and conservatives have a very bad relationship with the mainstream American news media. To a large extent, Bay blames journalists for the poor state of that relationship, arguing that they are biased in liberal, urban, and civilian directions. Nevertheless, he argues, the Bush people need the press to support the long-term struggle against Al Qaeda and Islamic extremism, or else we will fail:

Bay, a conservative pundit who is angry at the “liberal media” and presents a long bill of specific grievances, nevertheless recommends that the Bush Administration try to improve its relationship with journalists.

Now, here’s my response. First, the press powerfully helps or hinders American presidents and administrations in achieving their policy goals. It is not neutral, although it can be diverse. Second, the relationship between the press and the White House has changed dramatically, in ways that make life more difficult for presidents.

The period from 1945-1965 remains a benchmark for those who want the press to be more supportive of the US military and presidency. But it is important to note that the stars were then aligned to the benefit of presidents Truman, Eisenhower, and Kennedy. There was virtual consensus about foreign policy and national economic policy (which everyone wanted to be Keynsian). To be sure, there were wrenching national debates about Jim Crow and McCarthyism/Communism, but the leaders of the two national parties tended to adopt similar positions on these matters, positions that were also shared by the editors of The New York Times and like publications. All these people knew each other: they were white men who tended to graduate from the same schools and colleges. Reporters were aware of, but left completely unreported, politicians’ personal problems and faults. The national press also imposed on itself a set of norms that were then only about 50 years old: nonpartisanship, a separation of news from opinion and fact from fiction, and objectivity (epitomized by the suppression of first-person reporting). Reporters tended to take leaders at face value and report their explicit arguments; they did not reflexively interpret everything a politician said as a ploy to obtain votes. Perhaps most important, the American people trusted the government, as the following trend lines show. 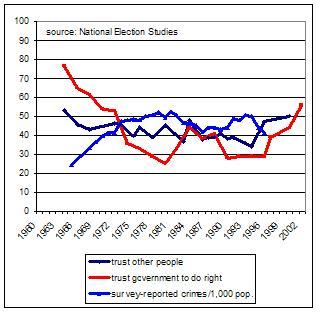 Trust in government correlates with trust in other human beings (r=.17 in the National Election Studies); and many people did trust their neighbors in an age of prosperity, high associational membership, clear memories of World War II, and relatively low crime and divorce. (Note the huge increase in per capita crime after 1963, shown above.) I don’t mean to romanticize America ca. 1960, when gross inequalities were papered over. I only want to argue that life was relatively easy for political leaders, because the press and public alike tended to support them and overlook their foibles.

All of this changed after 1965. Public trust in the government fell. The parties became more ideologically consistent and polarized. Public consensus on foreign policy crumbled. As Dan Yankelovich writes in Foreign Affairs, “Americans are at least as polarized on issues of foreign affairs as they are on domestic politics. They seem to have left behind, at least for the time being, the unity over foreign policy that characterized the World War II era and much of the Cold War period. As might be expected, Americans today are split most sharply along partisan lines on many (though not all) aspects of U.S. foreign policy.” Particularly interesting is the 43-point gap between Republicans and Democrats on whether the US is “generally doing the right thing with plenty to be proud of” in foreign policy.

After 1965, the press chalked up what Bay calls two “great gotcha successes”: Vietnam and Watergate. Perhaps those powerful exposes lowered public trust and helped turn journalists into skeptics of government. Or perhaps–as I suspect–journalists belong to our culture, and America as a whole was turning anti-authoritarian, skeptical of power, and less trusting of human beings in general. The modern journalistic “frame” which interprets all political behavior as strategic and self-interested comes, I think, out of our broader culture and not just out of J-schools and news rooms.

Bay argues this is how the press now operates:

Reflecting on how the national press treated Bill Clinton, or how the Washington Post covers local political leaders (who are mostly African American and Democratic), I would say that the rules are:

Rule One: Presume all powerful people are self-interested, and everything they say and do is calculated to win them votes. Rule Two: Look for scandal and failure in all public institutions: schools, the military, welfare systems, the police. Rule Three: Always report allegations against political leaders (followed by their denials) on the assumption that conflict between potentially victimized citizens and potentially crooked politicians is a major form of “news.” Don’t pay as much attention when citizens agree with one another or work together to address problems.

Evidently, my take is somewhat different from Bay’s, but the difference doesn’t matter much. There is little doubt that the modern press makes life more difficult for any American president than it once was. It has not become more difficult to be elected or re-elected. After all, someone has to win, and one side will beat the other at the media game. But it is more difficult to realize an ambitious agenda. I’m not sure that Truman, Eisenhower, and Kennedy could have built the interstate highway system, desegregated schools, conducted large-scale, undeclared “police actions,” and imposed 90% marginal income tax rates without a supportive and gentle press. Those days are gone.

So what lesson should we draw? I suspect that many of my readers are glad that trust has fallen, recognizing that the U.S. government has done many bad things when not overseen by a skeptical, watchdog press. If anything, many people wish that the press had been much more skeptical of the Bush administration in the run-up to the Iraq war. (Note that public confidence in government and social trust were relatively high in 2002, just when the press was being deferential.) Many people are glad to see the president’s approval ratings fall and the press get tougher.

I fully accept that argument, and yet it strikes me that liberal presidents also have a harder time governing when the press is antagonistic to power. In fact, it isn’t because Bush has pursued conservative policies that he has tangled with the press. His tax cuts get relatively little coverage, positive or negative. It was when he embarked on a radical, state-led social experiment by invading Iraq that the press pounced, because journalists are always ready to expose the weaknesses of government. I’m against the war in Iraq, but I’m afraid that the attitudes of the mainstream press that Bay dislikes are actually worse for liberals than for conservatives.

Besides, we do need to win an information war against Bin Ladenism, and journalists ought to figure out what their role is going to be in that struggle.

Their coverage will affect international opinion–as well as domestic opinion about matters like civil liberties. They are not innocent or politically powerless. So where do they intend to stand?

Above all, we might ask whether the big decline in public trust is a good thing. Hamilton proposed as a “general rule” that people’s “confidence in and obedience to a government will commonly be proportioned to the goodness or badness of its administration.” If that is true, then the decline in trust since 1960 was merely a measure of the falling trustworthiness of government. Perhaps–but again, a failure of government is worse news for liberals than for small-government conservatives.