CIRCLE has released a highly substantive analysis of social media and the 2018 youth vote that is worth reading in full.

It probably won’t surprise you that many young adults heard about the election on social media. In fact, it might be worth pausing over the fact that only 47 percent saw something about it on Facebook, Instagram, Snapchat, and/or Twitter. It is possible to go through an election cycle without seeing much about politics on social media if your friend-networks are apolitical. We talk a lot about polarization into left and right, but an equally significant phenomenon is the division between political and apolitical Americans. That was less of a problem when people got their information from sources like broadcast TV and newspapers, which forced everyone to see political headlines.

More than one quarter of young adults heard about the election only on social media, not from traditional outreach by campaigns, candidates, and parties. That probably means that social media is expanding the number of youth who are engaged in the election.

The more you hear about an election, the more likely you are to vote. Compared to young adults who had heard about the election both on social media and from campaigns or candidates, young adults who recalled no outreach were less than half as likely to say (in October) that they were extremely likely to vote. 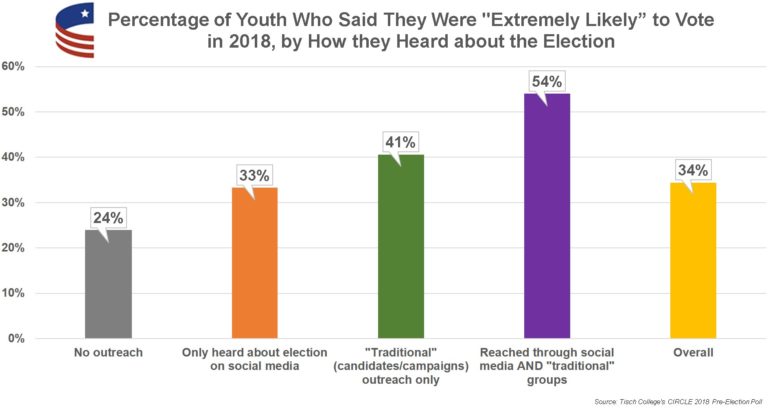 Some selection is at play here. If you are already a likely voter or part of a community that is seen as active, campaigns are more likely to contact you. If you have friends who vote, you are more likely to see information about the election online, but you might have voted anyway. Maybe you even pick friends who are into politics. Still, evidence from randomized experiments shows that outreach boosts turnout, and at least some of these differences must be attributable to the effects of outreach.