(Korcula, Croatia) I am in Europe for a mixture of work–in Ukraine and Germany–and vacation. Meanwhile, the Florida Review has published The Anachronist as a multimedia feature. It begins:

A woman is bound to the stake to be burned:
No hope of using the secrets she’s learned.
A sagacious doctor awaits his fate,
Captive in the Tower behind Traitor’s Gate.
His student could strike to make justice prevail.
Righteous is he, but his judgment may fail.
Over the sea comes a painter who sought—
Not the dark cellar in which he is caught.
In the midst of these four, a lady is torn.
She must choose just one, leave the rest forlorn.
Time’s arrow flies; let us find where it lies. 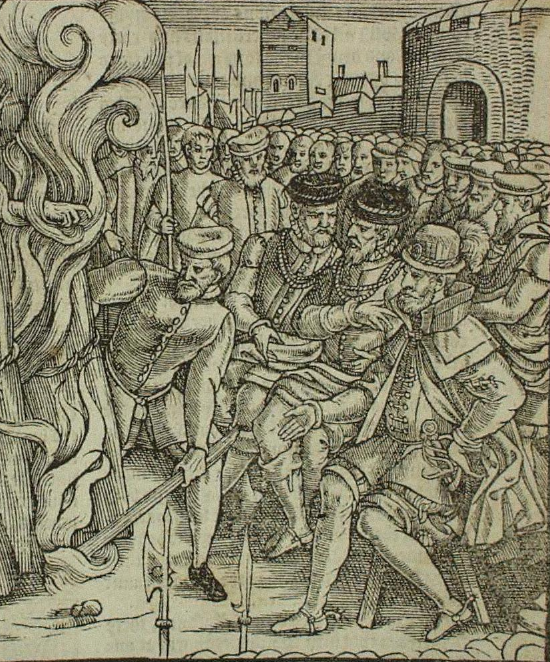 A woman stands to her waist in a mound of logs and neatly bundled furze kindling. The split logs beneath her feet cut into her bare soles. A rope winds around her body from her thighs to a triple knot at her chest. The stray hairs on the knot’s surface shake in the wind.

She thinks: You watch small, harmless things like this every day of your life. If I were a child, I would play with this rope, pull its strands apart, or drag it behind me like a tail.

The words she hears in her head are Dutch, her native language. Although her body is trussed, she can turn her face. On her left she sees seated clergymen and dignitaries. The name “Thomas Lucy”—“Sir Thomas”—comes into her mind as she identifies a bearded, red-faced gentleman with a heavy gold chain over his furs. Look how calm he seems now, she thinks. Look at his fat hands, how relaxed they are, clasped over his fat belly. When he questioned me in the castle, those hands were always twitching, scratching, accusing ….