I can’t recommend too strongly Hahrie Han’s New York Times piece entitled “Want Gun Control? Learn From the N.R.A.” Her argument is important not only for gun-control advocates but for everyone who has a political cause in 21st century America.

Han notes that the NRA does not win because it deploys more money than its opponents do. Funding is substantial on both sides of the issue. I would add that most political scientists doubt that money has much influence on high-salience legislative battles.

Rather, the NRA has “built something that gun-control advocates lack: an organized base of grass-roots power.” Han identifies three characteristics of the NRA that I believe have always been the main ingredients of vibrant civil society in America: 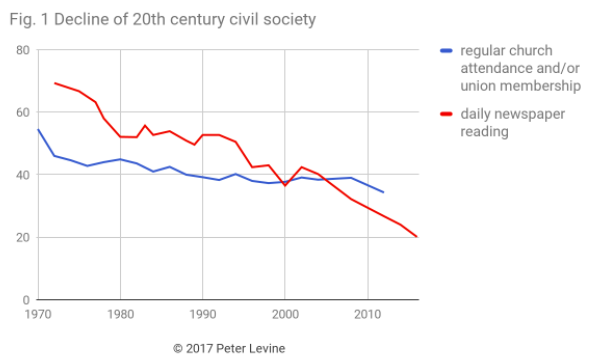 In contrast, most gun-control groups draw people who already agree about their issue. We join because we want to regulate guns, and only for that reason. Our relationship with the organization is transactional. They ask us to send them money or contact members of Congress, and we take these actions as individuals. Han recalls:

When I joined gun-control groups, I got messages about narrowly defined issues like background checks and safety locks. These messages were a pollster’s dream, tested down to the comma to maximize the likelihood that I would donate or take action. But they never challenged me to rethink who I was or what my relationship to my community was.

A community of people organized around a whole way of life and capable of developing relationships and leadership–that is a fearsome force in politics. A list of people who already vote in a given way and agree to send money or make phone calls–not so much.

One result is that the NRA beats the gun-control groups. The other is that many people lack opportunities to become effective and well-networked citizens because they don’t see organizations around them that offer any opportunities for belonging. They perceive their communities as what my colleagues Kei Kawashima-Ginsberg and Felicia Sullivan named “civic deserts.” (The analogy is to food deserts: places where nutritious food is not for sale.) In an era of civic deserts, a robust membership group like the NRA has awesome power. If you admire their structure but despise their lobbying agenda, then the solution must be to build alternative structures.

See also:  Civic Deserts and our present crisis; the Hollowing Out of US Democracy; we need SPUD (scale, pluralism, unity, depth). And see this new article by CIRCLE: Mitigating the Negative Consequences of Living in Civic Deserts – What Digital Media Can (and have yet to) Do