I’m back from a great meeting in Chicago in which one theme was the need to have honest, productive conversations between people who might support Donald Trump and members or supporters of movements like Black Lives Matter. I’d note a major obstacle: the fact that working-class white people–the demographic core of Trump’s support–don’t have organizations that answer to them. As an illustration, consider that just 6 percent of adult Whites without college educations now belong to unions. That’s below the rate for college graduates, many of whom have other organizations behind them. 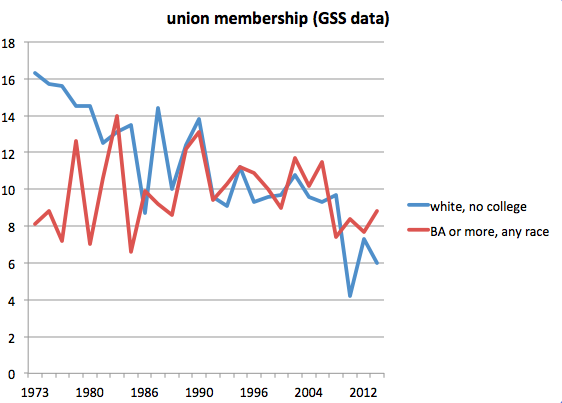 A lack of organization blocks or distorts difficult discussions, for these reasons:

In 1959, A. Philip Randolph helped found and led the Negro American Labor Council as a voice for civil rights within the labor movement. As he pressed and negotiated with his fellow labor leaders on matters of civil rights, he was giving their millions of White rank-and-file members the opportunity to discuss segregation and racism productively. Crucially, not only were the Sleeping Car Porters organized; so were the predominantly White autoworkers, steelworkers, and mineworkers. Randolph also had–and used–substantial leverage over a Democratic Party that was still dependent on working-class voters, White and Black.

I’m certainly not implying that everything went smoothly in those days and reached satisfactory conclusions, but Randolph at least had a strategy that made sense. In an era of niche celebrities, candidate- and donor-driven political parties, and weak civic institutions, that strategy looks much harder.

Counterargument: The Fraternal Order of Police is an organization. Its members, although diverse demographically and ideologically, need to be at the table for any discussion of racial justice. But the FOP has endorsed Trump; and in many local contexts, its spokespeople seem particularly unwilling to deliberate and negotiate. Hence being organized is not a path to productive conversations. … To which I’d respond: Privilege yields to political power. Only effective political action will bring a group like this to the table. But the police can come to the table because they are organized, and that creates a strategic opening that is absent when people with similar views aren’t organized. It also enables pressure to come from within. For instance, the association that represents 2,500 Black police officers in Philadelphia has called Trump an “outrageous bigot” even as the Philly FoP has endorsed him.

See also: why the white working class must organize.