the case for standardized civics tests 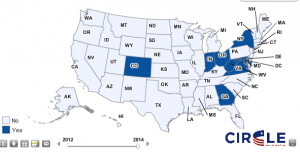 , should you require a civics test? As our interactive map shows, eight states have done so. (Florida’s test came online after the map was completed.)

I have always had mixed feelings about these standardized tests. They measure individual knowledge and academic skills, rather than distinctively civic skills, like deliberating with fellow citizens or addressing a real-world problem. They ignore current events in favor of historical knowledge, both because it’s political risky to test anything even potentially controversial and also because the long process of test-development precludes including timely information and issues. If teachers feel they must spend time preparing for a test, they could shortchange the very experiences that I value most, such as moderated and civil discussions of difficult current issues.

On the other hand, the test compels attention to civics. As I learned last week in Florida, the new 7th-grade test is even creating additional jobs for middle school civics teachers, with benefits for the state’s teacher education programs. Many districts are offering civics for the first time and need to hire. If those new teachers spend some of their time on genuinely valuable activities while also preparing students to pass a test of meaningful and significant knowledge, the net effect could be good.

First, John Saye and the Social Studies Inquiry Research Collaborative (SSIRC) examined the relationship between state civics tests and what they call “authentic pedagogy.” Their observers visited classrooms and noted whether, for example, …

Students study or work on a topic, problem or issue that the teacher and students see as connected to their experiences or actual contemporary or persistent public issues. Students recognize the connection between classroom knowledge and situations outside the classroom. They explore these connections in ways that create personal meaning and significance for the knowledge. This meaning and significance is strong enough to lead students to become involved in an effort to affect or influence a larger audience beyond their classroom in one of the following ways: by communicating knowledge to others (including within the school), advocating solutions to social problems, providing assistance to people, creating performances or products with utilitarian or aesthetic value.

They find that students who have more of these “authentic” civic experiences score better on state-mandated civics test, once other factors are also considered. That does not prove that adding a state test will encourage good teaching; teachers may mistakenly drill their classes on facts. It does show that teachers would be well advised to use “authentic” pedagogies if their students face a civics test.

Second, our friend David E. Campbell has reanalyzed data that CIRCLE collected in a 2012 survey. He finds that high-stakes civics tests boost students’ knowledge as we had chosen to measure it (on a six-item scale of matters that we considered consequential and valuable). The benefits appear greatest for students of color. For instance, the apparent effect of living in a state with a consequential civics exam on the civic knowledge of young African Americans is greater than the effect of their educational attainment.

These articles are tipping me in favor of standardized civics tests, although we must work hard to make sure the tests are good and teachers are supported and encouraged to use valuable techniques in their classrooms.

Associate Dean for Research and the Lincoln Filene Professor of Citizenship and Public Affairs at Tufts University's Tisch College of Civic Life. Concerned about civic education, civic engagement, and democratic reform in the United States and elsewhere.
View all posts by Peter →
This entry was posted in advocating civic education, Uncategorized. Bookmark the permalink.