mapping a class as a moral community

On the first day of the spring semester, I asked members of a small philosophy seminar to reflect on their own core moral ideas–meaning not only their abstract principles but also their concrete commitments and role models–and how those interconnect. They gave me their data (concealing any ideas that they wanted to keep private), and I mapped the results as one network for the class as a whole.

In general, the ideas cluster by student (each colored differently in this map); but when two or more people share an idea, the borders among individuals begin to break down. 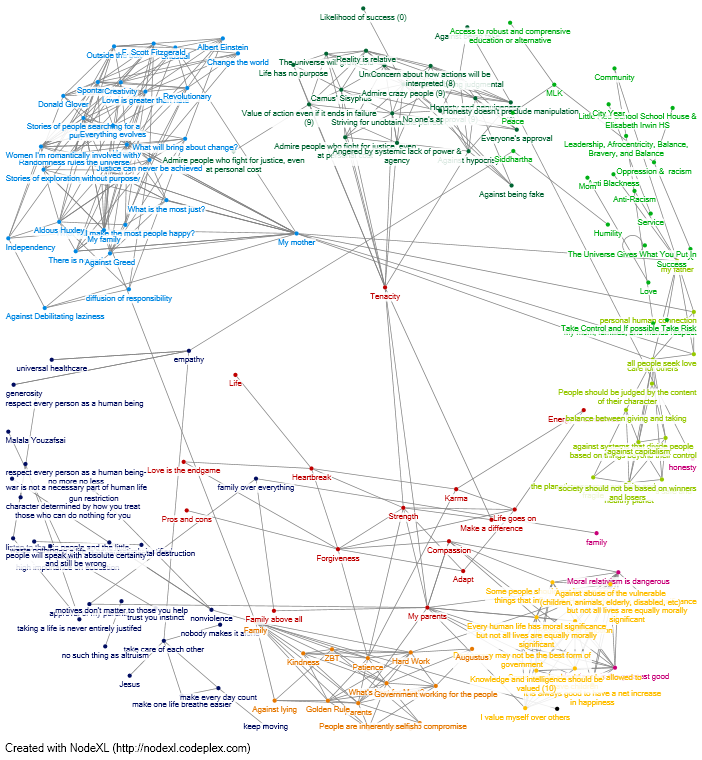 I hope that over the course of the semester, the map will become more integrated and denser as the students add ideas and connections among ideas and begin to hold more ideas in common. Their thinking should be influenced, in part, by the readings and by me; therefore, ideas discussed in class should pop onto the map. Agreement is not the goal, but members of a discursive community should share reference points. One student actually predicted increased polarization as new ideas are thrown into the mix, and that is certainly possible.

Why did I ask them to give me networks? I could have asked for lists of ideas (perhaps ordered by importance); for structures (with fundamental ideas implying consequences); or for bodies of text that explained each students’ views.

A list seems problematic because one cannot tell whether each item belongs on it. For instance, if it is true that one should maximize the happiness of the greatest number, then that concept should appear on your list. But if not, it should not be there. How can one tell? In contrast, you can ask questions about your network independent of the content of each node. Is the network dense? Does it cover a wide range of ideas? Are the ideas that turn out to be central worthy of their importance? Is the network connected to other people’s networks?

For elaborate reasons, I am skeptical of ordered structures for moral reasoning. But a network is actually a flexible form that can encompass a hierarchical structure. A utilitarian could give me a network that centered around the utilitarian principle. A network model simply does not presume that a moral worldview must be highly centralized or ordered.

Finally, a body of text would be valuable–but it would have to be very long, and I would be inclined to analyze it by looking for the ideas and connections that it implied. Thus the network is an efficient representation of the text, albeit one that leaves unexplained the individual nodes and the reasons for their connections.

Associate Dean for Research and the Lincoln Filene Professor of Citizenship and Public Affairs at Tufts University's Tisch College of Civic Life. Concerned about civic education, civic engagement, and democratic reform in the United States and elsewhere.
View all posts by Peter →
This entry was posted in moral network mapping. Bookmark the permalink.