My new book, We are the Ones We Have been Waiting For (which you can get from Amazon on October 8), essentially presents the following model: 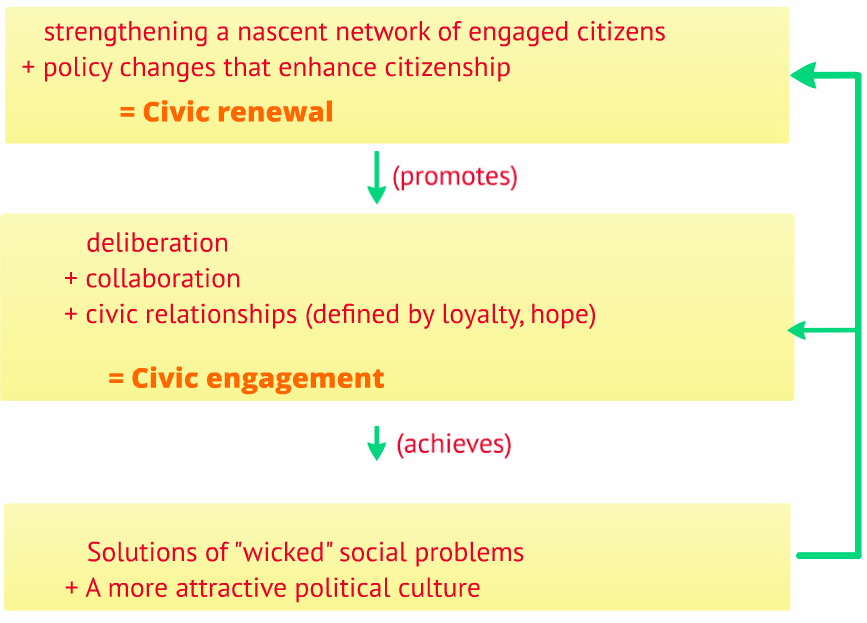 In part, this model is empirical. The arrows are causal, so they depend on data about  society as a whole and evidence about the performance of particular programs and initiatives. If a given effort works, that strengthens the case for doing more of it. (“Can implies ought.”)

But the model is also openly moral (or “normative,” in the sense that philosophers use that word). I favor the elements of the model for moral reasons, and the programs whose success I cite were built by people who had moral motivations for their work. For instance, educators don’t randomly decide to enlist teenagers in community service projects and observe what happens. They choose this strategy for principled reasons, and when it does not work as they hope, they improve their programs and try again. So their loyalty and hope are partial explanations of the empirical results on which my model is built.

In most comparable models (e.g., Positive Youth Development or Asset Based Community Development), the moral aspect is undeveloped–or so I argue. That is because social science teaches us that values are simply facts about people. A person just happens to believe X instead of Y. For a scholar, believing X is a limitation or bias to be disclosed and minimized.

I argue, instead, that an essential task is to get the values right. This is not just a matter of avoiding evil, but of fine-tuning one’s principles until they are fully satisfactory. That process is as difficult–and as important–as fine-tuning one’s statistical model. When people think generically about “getting the principles right,” they start worrying about moral skepticism and relativism. How can we know if our principles are right? Once we put such abstract worries aside, we can get down to business. We articulate our principles and the reasons for them in public forums in which other people may ask critical questions: Does your moral theory actually align with your practice? Does your moral theory account for another principle that is important in my moral theory? If not, why not? The result is a more robust moral view, analogous (and closely related to) a more robust empirical theory.

I would like to think that my model rests on moral deliberation as well as extensive empirical evidence. It also has a third basis: strategic analysis. I hope that by introducing and defending this model to actual readers, I will help them to modify their actions so that the world changes (at least modestly) in the direction the model suggests. I know that my readers will not be very numerous or powerful, and that fact informs the model. If the Supreme Court asked my opinion, I might make different suggestions, but this is an intervention meant for realistic numbers of my fellow citizens, situated more or less as I am.

In brief, the criteria for a good social model are:

I am not certain that the model in We are the Ones … is correct, but these are the standards by which I would like it to be judged.