Americans found colleges and universities. That tradition started in 1636 and it explains why we have nearly 4,500 degree-granting institutions today. Typically, periods of population growth and migration are marked by the founding of lots of new colleges and universities, which creates the opportunity for innovation. We’ve seen waves of new types: religious liberal arts colleges, Land-Grants, women’s colleges, research universities on the German model, HBCUs, “multiversities,” community colleges, and urban public universities, among others. Each wave also affects the older institutions. Harvard and Yale, for example, were founded as religious liberal arts colleges but adapted in imitation of the Germanic research universities and the state multiversities.

But look at the growth of postsecondary student enrollment from 1991-2011 versus the total number of colleges and universities. (Data from the Institute for Education Sciences; my graphs): 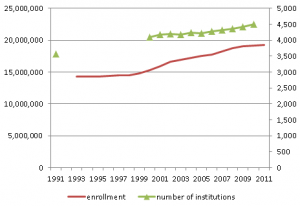 Some new institutions have been launched since 1999, but for the most part, the additional students are being squeezed onto existing campuses. For instance, the University of Central Florida was born in the 1960s, during the last burst of new college foundations, but its enrollment has grown from 1,948 in 1968 to 59,767 in 2012. The problem with that method of accommodating growing numbers of students is that it blocks innovation. Existing colleges are locked into their priorities and structures. We have also seen the rapid growth of for-profit colleges, like the University of Phoenix, which are included in the trends shown above. They innovate, but in ways that make me highly suspicious. Until we see the birth of a substantial number of new nonprofit or state institutions, I will be pessimistic about innovation in the sector as a whole.