CIRCLE today announced the formation of a new Commission on Youth Voting & Civic Knowledge. We have organized it in response to controversies about recent voting legislation (for instance, the new state photo ID laws) as well as debates about civic education in schools and colleges. The commission will, however, take a broader view, considering a wide range of potential influences on political knowledge and engagement. It begins with no position on the existing or proposed policies; its deliberations will be heavily influenced by new data that we will collect and analyze.

Youth turnout was comparatively strong in 2012, and enough young people voted that they effectively chose the president. Also, our preliminary analysis shows that the new voting laws had modest impact, or else efforts to combat them paid off–either way, their net effect was very small. 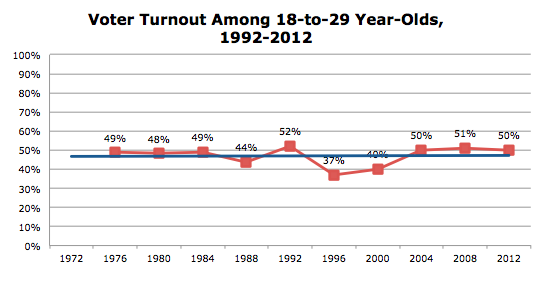 But these findings do not diminish the significance of the youth voting problem. In seven of the 10 elections since 1976, youth turnout has settled in a very narrow range of 48%-52% of eligible people under 30. (The only exceptional years have been worse.) Most of the young adults who vote have college experience; working-class and poor young people tend not to vote. This year’s turnout rate–50%–is really no cause for celebration, and we need to find ways to break through that ceiling and include everyone.