The General Social Survey asked a set of questions about political values or principles twice, in 2004 and 2014. The questions were phrased, “How important is it ….?” and the items included: always to obey the law, always to vote, never to try to evade taxes, and always to understand other people’s reasoning. Respondents were also asked how important it is for people to be able to participate in making decisions. It’s a nice mix of conventional civic obligations and deliberative and participatory values.

As is my wont, I have looked at the changes generationally. Graphs are helpful for visualizing these changes. For instance, the first graph below displays an interesting pattern in attitudes towards understanding other people’s reasons. Generation Xers have become substantially more committed to this value as they (or I could say “we”) have aged, although we still lag a bit behind our elders. Older Americans have lost their commitment somewhat, especially the group that was born between 1926 and 1945. Millennials enter the picture with the highest levels of support currently, although they rate listening as less important than their grandparents did a decade ago. 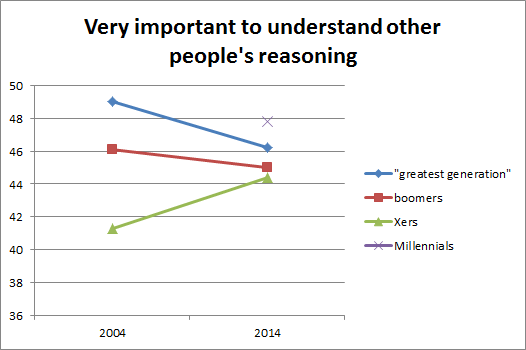 I’ll display a second graph that shows quite a different pattern. The younger you are today, the less likely you are to believe that it’s very important for people to be able to participate in decisions. At least since 2004, the older cohorts have not changed their minds on that topic. Millennials continue the pattern of declining support by entering adulthood with the lowest levels of commitment to the value or principle of participation. This graph suggests that unless we do something to change the trends, generational replacement will gradually lessen our commitment to participation. 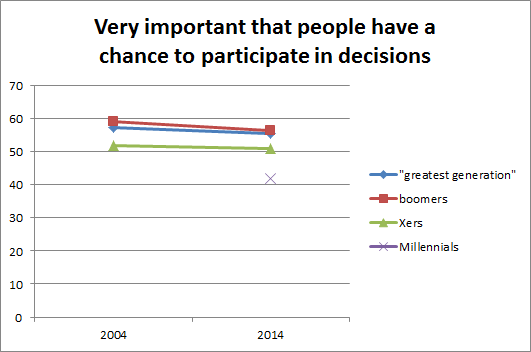 The pattern for always obeying the law looks like the second graph above, although the gaps are smaller. Millennials seem less committed than their predecessors, which could reflect an openness to civil disobedience.

All the older cohorts have grown to oppose tax evasion more as they have aged. Millennials enter the picture least committed to that ideal, but they are just where the Xers were a decade ago, and it’s possible that people’s focus on this topic naturally grows as they age.

Voting, finally, shows a pattern like participation in decisions (the second graph above). Commitment is lower for each generation, and much lower for Millennials. The older generations did not change their minds between 2004 and 2014, but the shrinking of the pre-War cohort and the growth of Xers and Millennials pushes down the average for the population as a whole. Voting is becoming less of a perceived obligation due to generational replacement. However, it’s important to note that this is a question about the obligation to vote. Actual voting rates have been flat over time. In other words, Millennials vote at similar rates to their predecessors; they are just less likely to conceive of that action as a duty.