I have been developing a method for representing moral beliefs as networks of ideas. Various friends have also been contributing to the devel 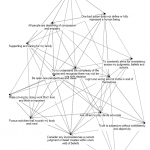 opment of this approach. So far, we have asked individuals to name their own beliefs, given them back their lists, asked them to note which pairs of beliefs seem connected, and generated network maps of their beliefs and connections. I’ve also asked individuals to share their maps with peers and to consider making changes in response to other people’s arguments. I have mapped the ideas of multiple people as one network. Instead of using surveys, one could interview people or groups about their moral thinking on a given topic and identify the beliefs and connections implied by their speech–or use a rich text, such as a poem, to discover an implicit network map. Major moral theories also have network shapes that can be diagrammed. Virtues, for instance, are important nodes in Aristotle’s conceptual network, and he says that the virtues are all connected by way of one central concept, practical wisdom.

I do not see this network approach as a model of moral thought, an empirical theory about how we actually think, or a normative theory about how we should think. Instead, I see it as a technique of analysis that is relatively neutral with respect to models and theories, yet it does have certain substantive implications.

According to the Stanford Encyclopedia of Philosophy, there is little clarity or consensus about what defines a theory versus a model. But let me propose two analogies:

Likewise, I would propose that mapping moral networks is a technique with which one can build models and test hypotheses. It is fairly flexible and can accommodate a range of substantive views from both psychology and philosophy. But its relative value (compared to other techniques) varies depending on some assumptions about morality. I’ll compare it to two prevalent alternatives.

First, some moral philosophers construct systematic views. An example would be the sophisticated utilitarianism of Henry Sidgwick (which we could call “utilitarianism 3.0,” if Bentham’s was 1.0, was Mill’s was 2.0). Sidgwick held that there is just one ultimate moral principle: maximizing human happiness. But it generates a set of important moral rules, such as being kind and telling the truth. These precepts, in turn, imply many ordinary moral judgments, such as telling the truth to your mother.

Sidgwick’s structure was mainly philosophical, not empirical. He did not say that everyone is a utilitarian (in fact, he explicitly denied that), but that everyone’s judgments should be consistent with the results of utilitarian reasoning. There was, however, an element of empiricism is his view. He doubted that we can directly apply the utilitarian principle to real cases, which is why subsidiary rules are valuable.

Sidgwick’s structure can be diagrammed as a tree-like network, and that is somewhat illuminating. Individuals’ actual moral networks could also be mapped and compared to Sidgwick’s diagram, as a form of moral assessment. However, if Sidgwick was right, then network analysis has limited value. After all, his proposed network is quite simple, and some of the power of network modeling (e.g., detecting subtle clusters in large fields of data) would be wasted. Thus …

P1. Network techniques become more useful if we presume that real people hold many different structures of moral thought, that a theoretically driven structure like utilitarianism is not necessarily ideal, that some structures are much more complex than Sidgwick’s, and that comparing structures is illuminating.

Second, the moral psychologist Jonathan Haidt currently proposes six “moral foundations,” although his theory is subject to testing and improvement, and he is open to finding more than six foundations. One technique he uses is factor analysis. Many individuals are asked many questions about moral topics, and Haidt and colleagues look for unobserved variables (“factors”) that can explain a lot the variance in the answers. In developing statistical models that predict the actual results as a function of a few variables, they seek parsimony and fit. “Parsimony” means that fewer factors are better, but “fit” means that the unobserved variables should explain the actual survey answers without too much error.* Once the data yield statistical factors, Haidt and colleagues consider whether each one names a psychological instinct or emotion that 1) would have value for evolving homo sapiens, so that we would have developed an inborn tendency to embrace it, and 2) are found in many cultures around the world. Now bearing names like “care” and “liberty,” these factors become candidates for moral foundations.

Network analysis could represent Haidt’s model, just as it can represent Sidgwick’s very different conception. Each of Haidt’s foundations would be a central node connected to many concrete beliefs by one-way arrows. However, if Haidt is right, then network analysis is not as valuable a technique as the one he uses, factor analysis. First, network analysis is not nearly as parsimonious. A network map may show hundreds of beliefs clustered to varying degrees. Instead of generating six nameable foundations, a network map might yield fifty somewhat vaguely defined and partly overlapping clusters.

Second, the network method presumes that people’s explicit connections are meaningful. I diagram subjects’ networks using their assertions that their own beliefs are linked–for example, I link A to B when someone thinks that A gives her a reason to think B. But Haidt and colleagues argue that we do not know which beliefs are meaningfully connected. We reach conclusions because of unconscious biases and use reasons as mere rationalizations, gerrymandering our arguments to fit what we want to believe because of the underlying foundations. Sidgwick (like most philosophers) held that in morality, “as in other departments of thought, the primitive spontaneous processes of the mind are mixed with error, which is only to be removed gradually by comprehensive reflection upon the results of these processes.” But Haidt et al. believe that such reflection is basically ineffective, for only the primitive spontaneous processes of the mind really count. If that is the case, than the very items that matter most (the unobserved foundations) will be missing from a network map that is derived from people’s explicit connections. Thus …

P2 Network techniques become more useful if people have many clusters of moral ideas, if important information is lost by seeking parsimonious statistical models, and if reflection on explicit, conscious ideas and connections is valuable.