Whether you trust other people (in general) affects whether you collaborate voluntarily. Trust has been linked to prosperity, happiness, and health. It has been falling for young Americans–not in a smoothly downward path, but notably. And 2008 set the record, in a bad way, with just 21.4 percent of young Americans saying that other people can generally be trusted. 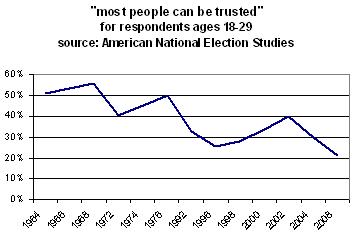 I am generally supportive of the kind of analysis that’s summarized in today’s New York Times: “surveys show that the majority of the nation’s millennials remain confident … that they will have satisfactory careers. They have a lot going for them. ‘They are better educated than previous generations and they were raised by baby boomers who lavished a lot of attention on their children,’ said Andrew Kohut, the Pew Research Center’s director. That helps to explain their persistent optimism, even as they struggle to succeed.”

But it’s a mixed picture. Optimism about careers is one thing; confidence in other people is a different story. Perhaps protective Baby Boomers failed to raise kids who trusted the outside world, or perhaps it’s a simplification to say that today’s generation was raised by protective parents. The young man in today’s Times profile was raised by a married couple in exurban Grafton, MA, with a family income in the national top ten percent. But 258 students enrolled in the Chicago Public School system were shot last year–quite a different context in which to grow up. And most young Americans fall somewhere in between: neither coddled nor terrorized, but hardly secure.