Oxford–the city, not the university–figures in my memories from all stages of my life. In fact, my connection to the town predates my memory. When I was a colicky baby, my parents rented a house in Oxford one summer that came with its own punt–one of the flat, polled boats that are common on Oxford’s two placid rivers. Apparently, I was happy only when lying on my stomach at the bottom of the punt.

When I was between seven and ten, we lived for several long periods in London. My father, a British historian, could make good use of the books and papers in Oxford’s Bodleian Library. We took family day-trips to Oxford that developed certain routines. We would go to a pet store in Oxford’s Victorian covered market, buy dry food appropriate for deer, and feed them in the park of Magdalen (pronounced “Maudlin”) College. The Magdalen park is stocked with short English roe deer and surrounded by a bend in the Cherwell River along which Joseph Addison liked to walk in the 18th century. The gothic towers of Madgalen (ancient and quaint even in Addison’s day) rise above the grass and water.

I also remember that we would buy tea in Brown’s cafe, which remained remarkably unchanged 15 years later–the same man still made tea by pouring hot water through what appeared to be the same nylon mesh sack. This is where the city’s “meter maids” and market vendors met around formica tables to talk in their thick, West-Country accents, straight out of Thomas Hardy.

And it was in the Minoan and Cycladic room of Oxford’s Ashmolean Museum that we learned I was color-blind, because I could not distinguish the regions on the map. From the same period, I remember the children’s book room upstairs at Blackwell’s book shop. It represented a certain style–affluent but bohemian: we would now call it “yuppie”–that was new in England and had not yet reached my home town of Syracuse. 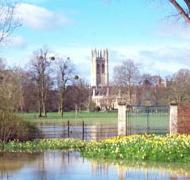 Later, when I was eleven or twelve, my father and I sometimes used to go to Oxford alone. We would meet about every two hours in the anteroom of the New Bodeleian, so that he could check up on me. Between our meetings, I would visit the Pitt-Rivers museum, which I now know to be an extremely eccentric Victorian collection of ethnographic artefacts; or I would buy stamps in a musty stamp shop east of the Cherwell or model train supplies on Broad Street.

Still later, in my teens, we spent two whole summers in or near Oxford. We’d often rent a punt and I’d pole my family along the Cherwell, which seems to run through deep wooded countryside even close to the University. I took a lot of pictures in those days (I had a darkroom back in Syracuse). I’d go in and out of Oxford’s colleges looking for good shots of old buildings.

And then, because I won a scholarship that was tenable only at Oxford, I attended graduate school there. I always felt like an outsider to the University, perhaps because I was a graduate student working alone on a dissertation at an institution that revolves around the undergraduate tutorial, or perhaps because I was uncharacteristically shy during that period. Or perhaps almost no one is an insider to Oxford, divided as it is among dozens of colleges and separate academic faculties. In any case, I knew and loved the physical environment, the ancient academic buildings, the bustling modern shopping districts, the old workers’ districts, and the farmland of the upper Thames Valley. Needing to take breaks from my writing, I used to walk several times a day. Sometimes I’d just stretch my legs around Addison’s Walk or Christ Church Meadow, whose miscellaneous cows munching before a medieval townscape looked like figures in a 17th century Dutch painting. Other days, I’d hike as far as Blenheim or at least to Iffley, where the Norman church still shows its primitive zigzagged carvings