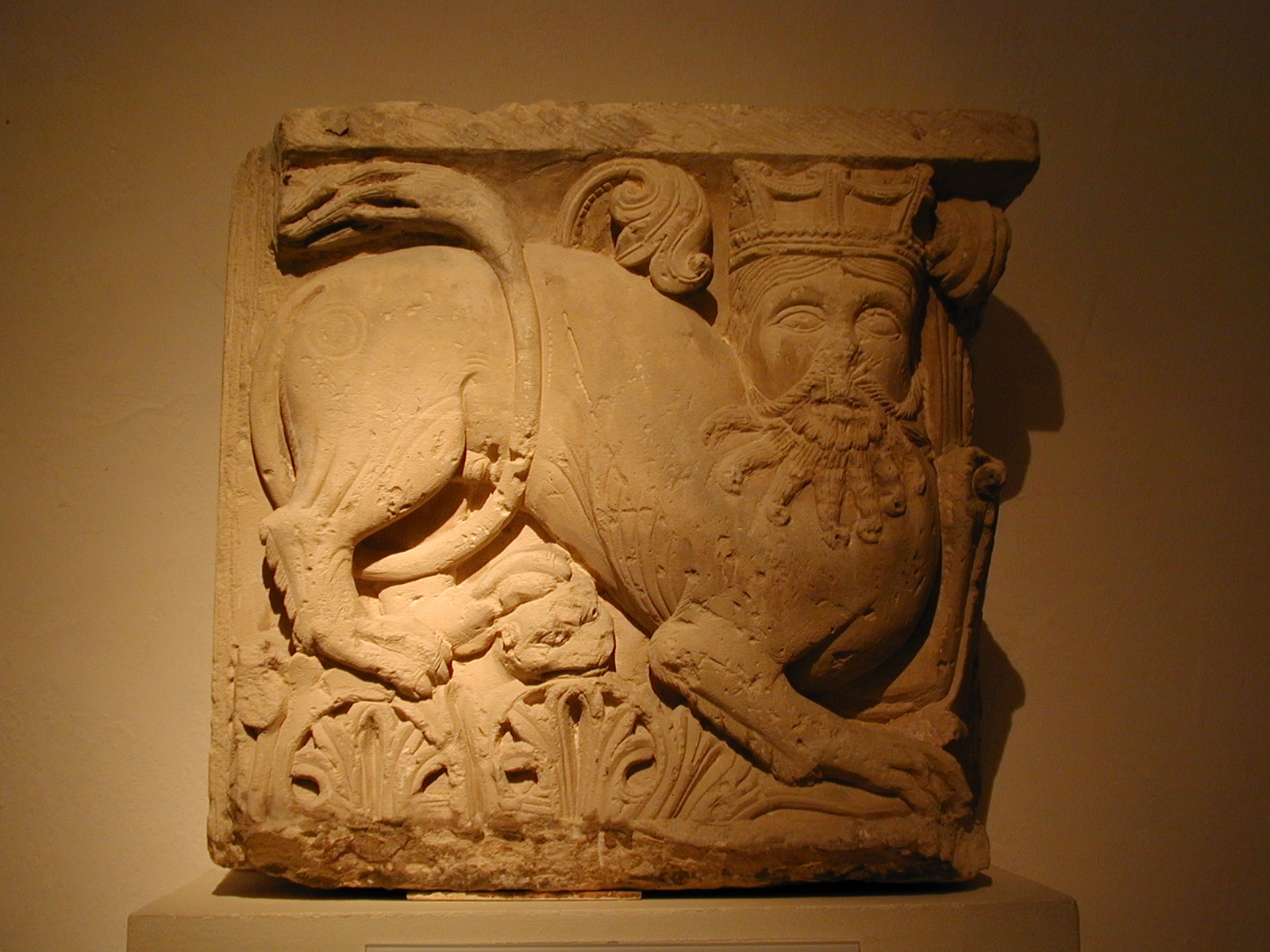 Here’s a discovery from our family visit to France three weeks ago. It’s a twelfth-century carving taken from a monastery in Burgundy. Unmistakably, it’s influenced by Persian images of lion-kings, the most famous of which date from the time of Xerxes. Frenchmen (“Franks”) went to the Middle East in the 12th century to fight the Crusades, so perhaps they saw carved Persian lions. Nevertheless, it’s amazing that a stone-cutter back in Burgundy was able to capture the essence of an animal he never saw–and of Persian art. Perhaps he copied a piece of Crusader booty, something like this printed textile lion from 10th-11th century Iran.

One could find out more about this artifact. Art historians are industrious and prolific, and I’m sure there is specific work on this sculpture as well as general writing about the influence of pre-Islamic Near-Eastern art on medieval Europe. That is the kind of work, however, that tends not to find its way online. Most scholarly research doesn’t go onto the Web because scholars want peer-reviewed publications, and there are few online professional journals. Most publications from before ca. 1995 aren’t digitized. Besides, museums control the right to photograph the works they own. I know from personal experience (with the Bibliotheque Nationale in France) that they like to charge a lot for reproduction rights of obscure images. Giving pictures away doesn’t fit their business plan. Therefore, there really aren’t that many images online. For example, the label under this French medieval lion said that it was derived from Sassanid Persian models (AD 224-651). In fifteen minutes of assiduous searching, I found only one Sassanid lion on the billions of web pages that Google indexes.

On the bright side, it is amazing how people with unpromising motives and perspectives can contribute to knowledge because of the Web. I found the lion’s gate at Persepolis thanks to a site that basically advertises a psychic. And I found the printed lion textile on a high school website.

Jamie Boyle, one of the leading proponents of the digital commons, writes:

If I had come to you in 1994 and told you that in the space of ten years, a decentralized global network consisting of a lot of volunteers and hobbyists and a ideologues and a few scholars and government or commercially supported information services could equal and sometimes outperform standard reference works or reference librarians in the provision of accurate factual information, you would have laughed. Your incredulity would surely have deepened if I had added that this global network would have no external filters, and that almost anyone with an internet connection would be able to “publish” whatever they wanted, be it accounts of Area 51, the Yeti, and the true authorship of the works of William Shakespeare, or painstaking analyses of Scottish history, how to raise Saluki dogs, and the internal struggles in the American Communist Party. Worse still, many inhabitants of this very strange new place will wilfuly and joyfully spread the wildest of rumours and speculations as facts, without going through the careful source-checking or argument-weighing that scholars are supposed to engage in. Your first reaction to this flight of fancy, (and the correct first impression of the World Wide Web as of its inception) was that this would thus be a uniquely and entirely unreliable source of information. And yet … when your child last had a research question from school did you go to Google, or the Encylopedia Brittanica?

When I wanted to find a Persian lion to compare to this French one, I used Google and found some imperfect matches. I was somewhat successful because I was willing to go to sites created by psychics and high school kids as well as museums and archaeologists. (This demonstrates Boyle’s point about the value of an open network.) On the other hand, I could have done much better in my university’s library, if I’d had the time and patience. And I could have learned much more online if we had different legal and economic incentives for publishing images and research.