I am pleased that this year’s election has prompted a lot of thinking about how to keep young people engaged. “Beyond the Vote” was the theme of the National Conference on Citizenship. There have been good news articles on the topic, e.g., this one in the Atlanta Journal Constitution. And now The American Prospect has asked a bunch of experts, plus me, to opine on what the Obama Administration should do to keep young people excited. Here are all the suggestions. Mine is this:

Barack Obama won an unprecedented 66 percent of the under-30 vote. Ronald Reagan set the previous record with 59 percent in 1984. The Reagan cohort has remained conservative ever since. Obama now has an opportunity to achieve a lasting realignment.

On the campaign trail, he electrified youth by asking them to work on public problems: “I will ask for your service and your active citizenship when I am president of the United States. This will not be a call issued in one speech or program; this will be a cause of my presidency.”

“Active citizenship” means more than helping the needy (which defined the liberalism of the Clinton era). It means talking with diverse people about challenges, analyzing and debating, and then working together to solve problems. Youth are hungry for this kind of work.

During the campaign, Obama gave youth many ways to plug in, from “friending” him on Facebook to taking a semester off to organize. Now that the election is over, he needs to offer a similar range of opportunities to cement their engagement. An issue like climate change requires a full spectrum of participation, from pledging not to drive once a week, to advocating legislation, to weatherizing homes as an Americorps volunteer, to becoming an EPA scientist. At a time when jobs are scarce and the public sector is weak and archaic, citizens’ work should be the hallmark. Then, there will be Obama Democrats in 2060 the way there are New Deal Democrats today.

(Des Moines) After meetings this morning, I’ll be on airplanes almost all day. No time to post anything substantive, but there’s a nice feature article about CIRCLE on the Tufts University home page right now.

(Des Moines, IA) I’m here to talk to teachers, students, and nonprofit leaders about service-learning: the intentional combination of community service with academic work. This is a big deal–24% of schools offer it. But the prevalence has declined, according to a new study by the Corporation for National and Community Service–down from 32 percent in 1999. 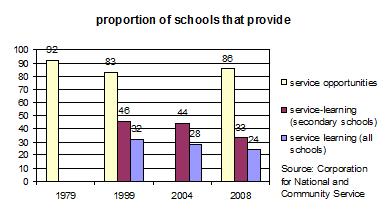 It’s my sense that the movement for service-learning has reached a crisis point. It isn’t included in federal education law; it isn’t a priority in an era of concern about reading and math; the federal funding has been cut (in real terms) since 2001; and the quality of programs is so uneven that outsiders could be reasonably skeptical about its value. On the other hand, the best programs are superb; they fit the outlook of the incoming administration; and there is strong support for service-learning in the Kennedy-Hatch Serve-America bill that both Senators McCain and Obama promised to sign. That bill would direct most resources to poor districts, which today are much less likely to offer service-learning. So we could be poised for improvements in quality, quantity, and eqaulity. Or else service-learning could falter if Kennedy-Hatch isn’t fully funded and the grassroots movement continues to shrink.

Wherever I go these days (the State Capitol of Texas, a restaurant in Boston’s Chinatown, and many points in between), people are telling moving stories about the reaction to the election. For instance:

When both of these stories were told, there were Republicans in the room who listened with grace and even appreciation. I think the President Elect has broad good will, partly because he broke the race barrier, partly because he ran a dignified and positive campaign, and partly because we all need him to succeed in this time of crisis. But it’s important to remember that many people did not vote for him, and some certainly had principled reasons not to. We need a two-party system across the country, including here in New England where there are now zero Republican US Representatives. Nothing really valuable can happen unless people of good will on the Republican side voluntarily participate, both in Congress and in civil society. It’s asking a lot for them to keep clapping at stories of Democratic triumph. They can focus on the civil-rights breakthrough, as William Bennett did rather gracefully on Election Night. But there is much more to Obama than his African American heritage. Especially for those of us who enthusiastically supported him because of his agenda, an important challenge now is to make sure we respect differences and are ready to include other people without assuming that they buy the whole package.

(Austin, TX) Last night, in Worcester, Mass., I heard Michael Dukakis speak at Clark University. He was very funny and had a whole ordinary-old-guy-who-once-lost-a-presidential-election schtick going. “Folks, I owe you an apology. If I had beaten Old Man Bush, you’da never heard of the kid. … Folks, you can ask me any questions you want, but not about the campaign we just had. If I knew anything about presidential politics, I’d be standing here in a different capacity.” “Folks, next time I run for president, Jim and Bob here are going to be my national co-chairs.”

I happened to walk out with the Governor, Kitty Dukakis, and a family friend of theirs, although I didn’t bug them by saying anything. The former Democratic presidential nominee went off to find the family car and save his elderly companions from walking on the rain-slicked paths.

Meanwhile, we read that the Obamas’ ordinary lives are now over–no more dinners out for Barack and Michelle, unless they want to have 300 Secret Service agents along. No more hair cuts at barber shops. It makes me think of the fickleness of fame, that great wheel that lifts some up and lowers others. Although the Obama Campaign was far more impressive than the Dukakis Campaign of ’88, I’m convinced that Obama won and Dukakis lost because of timing and sync with the national Zeitgeist. In the affairs of individuals, chance is almost everything. “The wise man pays just enough attention to fame to avoid being despised”–Epicurus.