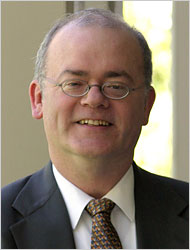 Cole Campbell died suddenly last Friday in a car accident. Cole had been editor of The Virginian-Pilot and The St. Louis Post-Dispatch, where he introduced and developed the concept of “public journalism.” Cole and his reporters did not take for granted that there was a “public” (in John Dewey’s sense) for their work. In other words, they did not assume that there were people out there who showed interest in public issues, who talked with one another, and who belonged to effective groups. In fact, all such forms of political engagement were in decline–just as newspaper readership was falling. In response, Cole and other practitioners of public journalism created neutral forums for public discussion. They stimulated interest in civic participation by covering civil society (not just campaigns and politicians). They changed daily practices in the newsroom. For example, instead of automatically looking for controversies and problems, they would sometimes celebrate consensus and civic assets. They also found new sources: civic leaders who didn’t hold official titles. In short, Cole and his reporters redefined “the news” and redesigned the newspaper to promote civic life.

I knew Cole pretty well for more than eight years. I brought him to Maryland once and attended many meetings and conferences with him. He was a live wire–funny, interesting, provocative, intellectual, a voracious reader, and always very full of life. In his gig as a dean of journalism, he undertook a typically creative experiment. I believe that most or all of his students were working together to build an impressive online resource about the environment of Lake Tahoe. It was, characteristically for Cole, a gift to the public.

Incidentally, I thought the New York Times’ obituary, written by David Cay Johnston, was quite good. Johnston quoted several people I would have recommended as experts on Cole’s contributions to journalism. This is only surprising because the Times never did any public journalism itself. Apparently, they have in-house knowledge of the movement. (For fine, personal obituaries by people who really knew Cole, see Rich Harwood and Noelle McAfee.)