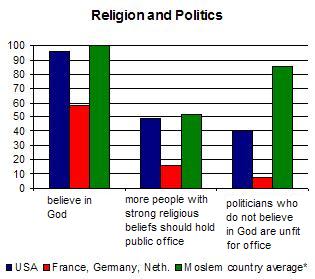 A colleague returned several months ago from a distinguished meeting of intellectuals from Europe, America, and the Middle East. He reported that the Islamic participants had confused us with France. That is, they thought that the United States was a highly secular, formerly Christian country with low tolerance for faith. Presumably, they drew generalizations about the “West” on the basis of what they know about the European countries that had once colonized them and that now absorb many of their emigrants.

In reality, Americans’ opinions about religion and politics sometimes lie closer to those in the Islamic world than to those of Western Europeans. Above, I show data from the World Values Survey (1999-2003). The “Moslem country average” is an unweighted mean of Algeria, Egypt, Jordan, Morocco, Pakistan, and (for the belief in God question only) Saudi Arabia. I show an average of France, Germany, and the Netherlands as representative of Western Europe.