Jonathan Chait’s entire interview with the president is fascinating. It offers Obama’s perspective on his own presidency, which is not the objective reality, but it is full of insights.

For instance, Chait asks, “So it’s January 27, 2009, and you hear Boehner say he is against the stimulus. I’ve heard complaints from Republicans about what you’re like in these meetings. They say you’re didactic and you lecture. In a situation like that, are you trying to discuss Keynesian theory and saying, ‘Do you believe in stimulus?’ At what level is the discussion held?”

Obama first responds, “You know, the truth of the matter is, it’s hard for me to characterize myself. You’re probably better off talking to some staff members who sit in on these meetings.” He’s right about that: none of us can objectively assess how we appear in interactions with others, especially in tense and difficult situations. No one would accuse this president of being unprepared, uninformed, or intentionally offensive, but it’s possible that his professorial manner alienates some people who read him as acting superior. As he acknowledges, he’s not the one to judge that.

He does, however, review his good relationships with Republicans in the Illinois legislature. He believes his problem with Republicans in Washington is strategic rather than personal: they decided to block his entire agenda in 2009, both to reverse their electoral losses and to appease their base.

Then he gives a window into how the conversations would actually unfold:

Look, typically what would happen, certainly at the outset, it would be that I would say, “We’ve got a big problem: We’re losing 800,000 jobs a month. Every economist I’ve talked to, including Republican economists, thinks that we need to do a big stimulus, and I’m willing to work with you to figure out how this package looks.”

Note the combination of a policy argument–which could be considered didactic, although it’s also correct–followed by an invitation to discuss.

And typically, what you’d get would be, “Well, Mr. President, I’m not sure that this big spending approach is the right one, and families are tightening their belts right now, and I don’t hear a lot of my constituents saying that they want a bunch of big bureaucracies taking their hard-earned tax money and wasting it on a bunch of make-work projects around the country. So we think that government’s got to do that same thing that families do.” So you kind of hit that ideological wall. I’m sure that after about four or five of those sessions, at some point, I might say, “Look, guys, we have a history here dating back to the Great Depression,” and I might at that point try to introduce some strong policy arguments. What I can say unequivocally is that there has never been a time in which I did not say, “Look, you tell me how you want to do this. Give me a sense of how you want to approach it.”

A common criticism of the president is that he’s too cerebral; he doesn’t know how to appeal to self-interest and make a deal. He offers three responses to that charge.

First, Republicans did not think it was in their self-interest to negotiate at all. “During the health-care debate, you know, there was a point in time where, after having had multiple negotiations with [Iowa senator Chuck] Grassley … in exasperation I finally just said …, ‘Is there any form of health-care reform that you can support?’ and he shrugged and looked a little sheepish and said, ‘Probably not.'”

Second, Obama insists that he did work the phones. “It’s interesting, in 2011, when the left had really gotten irritated with me because of the budget negotiations, there was always this contrast between Obama and LBJ, who really worked Congress. But I tell you, those two weeks, that was full LBJ. I think [White House photographer] Pete Souza has a picture series of every meeting and phone call that I was making during the course of that, which is actually pretty fun to see.” 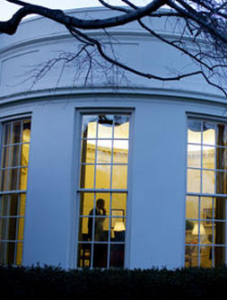 The president calling a Member of Congress on March 19, 2010

Third, a 21st century president just doesn’t have the bargaining tools that were available to an LBJ, not to mention an Abe Lincoln. “And one of the things that’s changed from the Johnson era obviously is I don’t have a postmaster job. … Good-government reforms have hamstrung an administration, which I think is for the most part for the best. But it means that what you’re really saying to them is, ‘This is the right thing to do and I’ll come to your fund-raiser in Podunk and I will make sure that I’ve got your back.'”

I’d add that not only patronage but the whole legislative process has changed in ways that reduce a president’s ability to deal transactionally with Members of Congress. Just to name one change, Congress now sends relatively few bills to the president, and they tend to be omnibus compromises that he more or less has to sign. Thus he can’t use a targeted veto threat to get a Member’s vote. Johnson received about eight times more bills from Congress than Obama gets.

The president is good at understanding and addressing differences of principle. For instance, “[Former congressman] Bart Stupak was a very sincere, pro-life legislator and a Democrat, a really good man who worked really hard with me to try to get to yes and ended up getting there, working along with Sister Carol [Keehan], the head of the Catholic hospitals, despite strong opposition from the Catholic bishops. So in some cases there really were legitimate difficulties, substantive issues that had to be worked through.”

The president has not been as successful at winning zero-sum negotiations, but I have often felt that he’s played a weak hand pretty well.