(New York City) As the nation grapples with racism and deep divisions over race, it is important to understand trends in opinions on these issues. Here is a small contribution to that topic.

In 1977, and then consistently since 1985, the General Social Survey has asked a representative sample of Americans this question: “On the average [negroes/blacks/African-Americans] have worse jobs, income, and housing than white people. Do you think these differences are mainly due to discrimination?”

This first graph shows the trends for Whites, Blacks, and all others. 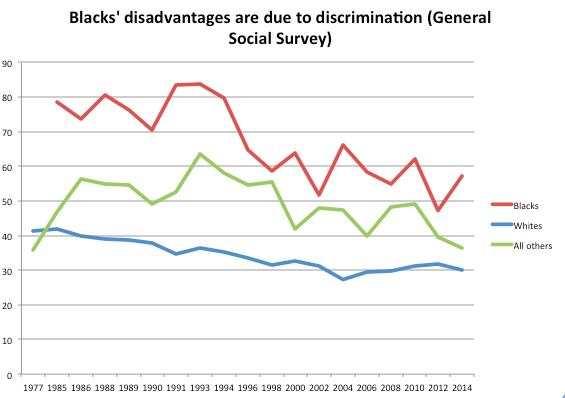 Between the early 1990s and 2012, Blacks became less likely to agree that discrimination causes unequal outcomes. In fact, the “yes’s” dipped below 50% for African Americans in 2012. Blacks have become more likely to answer “yes” since then. There hasn’t been a lot of change in the Whites’ responses since 1977, although a moderate decline is evident.

The second graph shows answers by generation. One important complication is that each generation has had a different racial composition from the others. In particular, Latinos and Asian Americans have become much more numerous as the Xers and then the Millennials have arrived. By itself, that demographic change would raise the positive response rate to this question for the youngest generations. To control for that, I show only White respondents in this graph. 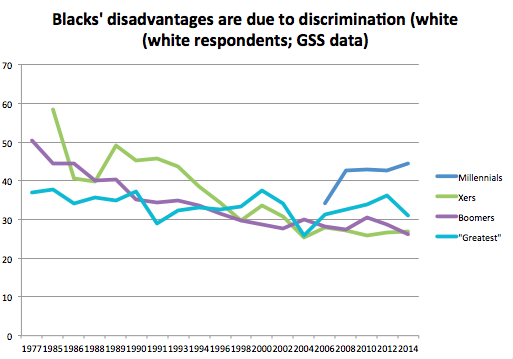 White Millennials are currently more likely to blame inequality on racial discrimination than the older groups are. That reflects a rather rapid change, since only a third of their cohort agreed in 2006. Nevertheless, less than half of them (44.5%) agreed with the statement in 2014. In 2012, according to a different survey, 58% of White Millennials said, “discrimination against whites has become as big a problem as discrimination against blacks and other minorities.”

Xers, by the way, have become substantially less likely to blame anti-Black discrimination over the course of their lives so far. More than half did when they were young, but just 27% did in 2014.

I think that Black Lives Matter reflects and contributes to a substantial increase in concern about racial discrimination since 2012. That concern has by no means captured a majority of White people, or even of White youth. However, the increase has been rapid among White youth and also among African Americans. The result is a movement that has a generational element, and a base in the Black community, but that also faces a lot of backlash.

See also: in what ways are Millennials distinctive?; tolerance and generational change; and the most educated Americans are liberal but not egalitarian (2).