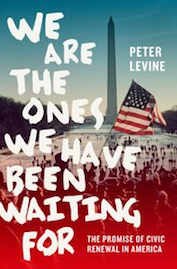 “Political philosopher and activist Levine (The Future of Democracy) argues that global problems can best be addressed by a targeted increase in deliberative democracy and citizen action. But the U.S. is currently marked by a decline in civic engagement, Levine notes, resulting largely from structural changes since the mid-20th century that have eroded many working-class organizations. Wielding an impressive command of research and statistics, as well as finer points of moral and political philosophy, Levine’s discussion of the benefits and contours of public engagement draw on lucid analogies and real-world examples (like the annual budget summits convened by Washington, D.C., mayor Anthony Williams, which empowered groups of citizens to deliberate on an area of central import to the whole community). Throughout, the message is that deliberative action among diverse networks of citizens goes beyond injecting public influence into the formal policy apparatus. The necessary goal, Levine writes, “is to democratize the whole process of shaping our common world.” Free market libertarians and others wary of civic engagement–especially where it impinges on market forces or the operation of business–will raise objections, although Levine anticipates these arguments to some degree. Broad in scope yet eminently practical, this book should be an enduring contribution to the study of democratic theory and social action.” –Publishers Weekly