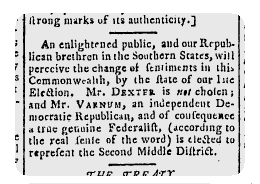 Yesterday, I wrote a long post about the uses of the words “democracy” and “republic” to describe the United States. I argued that they’ve had various and sometimes indistinguishable meanings–and both words are appropriate.

In the process, I started looking at some old newspapers, which are wonderfully accessible via Google’s news archive. This clip comes from the Aurora General Advertiser (Philadelphia), Apr. 30, 1795.  I read several days’ worth of the Aurora. It is enthusiastic about the French Revolution, hostile to Britain, and suspicious of the Federalists. It is Jeffersonian, so its favored politicians are mostly Southerners. However, this brief article concerns a Massachusetts congressional election that would give heart to the “Southern brethren.” The winner is described as an “independent Democratic Republican (and of consequence a true genuine Federalist, (according to the real sense of the word).” I was amused by that conjunction of four supposedly irreconcilable concepts: independent, republican, democratic, federalist.

For the record, Joseph Bradley Varnum was later Speaker of the House and a US Senator, and an abolitionist. His defeated opponent, Samuel Dexter, was a Federalist, later turned Republican, and a temperance advocate.