I am not one of those who saw the recent fiscal cliff brinksmanship as a failure of courage or wisdom. I think the president and congressional leaders faced a classic game-theory dilemma that was difficult to solve. Wall Street brokers assume that politicians are strictly self-interested; they can’t understand why Washington didn’t just make a deal. But the difficulty can best be explained as a result of politicians’ pursuing conflicting ideals.

If we presume that the parties hold the ideological commitments that they claim they do, then the situation on Dec. 31 was either a Prisoner’s Dilemma or a Chicken Game. To simplify, let’s assume there were just two players, the Democrats and the Republicans, and they faced one choice. To “defect” was to refuse a deal and head over the cliff. To “cooperate” was to agree to split the difference midway between the parties’ preferences. If the game was a Prisoner’s Dilemma, it looked like this: 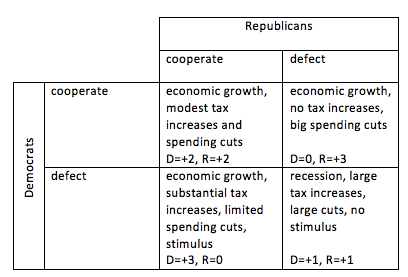 The dominant outcome (the one that would result when both parties maximized their own goals) was the bottom-right: recession. My preference was the bottom-left, but Republicans weren’t going to allow that in a one-round game. The top-left is better than the bottom-right, but the parties could not get there without each doing something that violated its own principles. That’s why it was hard.

One interpretation of the outcome is that the president simply caved, cooperating when the Republicans defected, and the result was the top-right corner. But even tough liberal critics don’t really think that. They think that Obama got something, just not as much as he could have won if he had opted for the bottom-right now and bargained again in January. For instance, Paul Krugman: “what Obama appears to have done is trade away part of the revenue from high-income taxpayers in return for some of the spending items he wanted.” From a conservative perspective, the bill certainly felt like a win for the president: taxes went up and no cuts were made. Charles Krauthammer called the deal a “complete rout for Democrats” and “complete surrender” for the GOP. In the Senate, only one liberal (Tom Harkin) voted against the agreement. I think the outcome counts as a compromise (i.e., cooperation by both sides, in game-theoretical terms). The only question is whether the president misplayed because the game is not final. It will continue, and perhaps he would have won more in 2013 if he had defected in 2012.

Prisoner’s Dilemmas are called “dilemmas” because it is very hard to get out of the bottom-right corner. Perhaps Biden and McConnell got us out of there, helped by the fact that the game would recur–opponents are more likely to cooperate when they know they have to play again. Another theory is that it wasn’t actually a Prisoner’s Dilemma. If you change the rank-ordering of the cells, you can turn a Prisoner’s Dilemma into a Chicken Game, which looks like this: 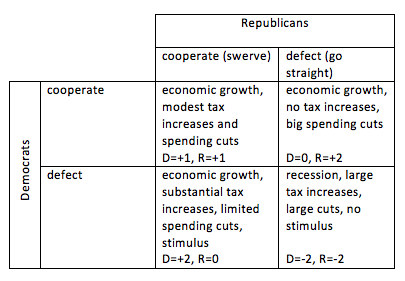 Unlike a Prisoner’s Dilemma, a Chicken Game has two stable outcomes: top-left and bottom-right. Either player may believe that the other will swerve and therefore drive straight ahead. If they both do that, they will crash. On the other hand, both may blink. Then they will reach the top-left cell, which is where I think we find ourselves.

If this was a Chicken Game, then liberal critics have a point. The best way to win a Chicken Game is to commit in such a way that you cannot take it back; then the other side must swerve. If you throw your steering wheel out the window, the other driver has to get out of the way. Thus Obama should have pre-committed to veto anything that didn’t meet his original position. On the other hand, both players in a Chicken game can pre-commit more or less simultaneously, and that is when they ram into each other. The Republicans had acted on several occasions as if they were throwing their steering wheels out of the window. That makes the president’s swerve somewhat understandable.

Only one thing really puzzles me. It would have served the Republicans’ interests to have gone over the cliff, let that reality sink in, and then voted for tax cuts. In that scenario, they would have accepted the same outcome that we got to yesterday but after a somewhat longer delay. The game would have looked like a two-step affair. In the first step, Republicans could have gone home to their right-wing districts saying that they had defied the president’s call for tax increases and the recession was his fault. In the second round, they would have cooperated with Obama on tax cuts to save the economy, looking good back home. Instead, they allowed the two stages essentially to merge into one, and as a result it appears they supported a tax increase. That seems to me a bad play.