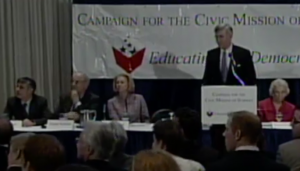 I’m sorry to read that Justice O’Connor has dementia. She has devoted her retirement years to improving civics, and she has taken that objective fully seriously.

Her greatest contribution is the nonprofit organization she founded to teach civics through video games—a remarkable idea for someone her age to invent. iCivics is now the biggest provider of civic education and contributes immeasurably to the field.

Justice O’Connor has also been a tireless advocate of policies for civics. The landmark civic education legislation in Florida is named after her, for a reason. She co-chaired the Campaign for the Civic Mission of Schools, which colleagues and I launched in 2003. She can be found on panels and ceremonies related to civics from coast to coast. That’s her, for example, to the right of David Skaggs in the picture above. (I’m doing my best to listen to the question from the audience.)

We have crossed paths in those contexts several times. She has often taken me by the hand, bored her steely blue eyes into me, and ordered me to do something—such as evaluate the impact of a national program.  I didn’t always comply but always took the obligation very seriously.

I won’t comment on her jurisprudence, if for no other reason than I haven’t studied it carefully. I have a working theory that she was especially deferential to autonomous institutions, such as universities. Whether that was wise or not is a matter of debate. Today, I’d rather celebrate her as one of the great retirees and citizens of our time.

Associate Dean for Research and the Lincoln Filene Professor of Citizenship and Public Affairs at Tufts University's Tisch College of Civic Life. Concerned about civic education, civic engagement, and democratic reform in the United States and elsewhere.
View all posts by Peter →
This entry was posted in advocating civic education. Bookmark the permalink.