Early this month, Boston City Councilor Ayanna Pressley defeated incumbent Rep. Mike Capuano in the Democratic primary. CIRCLE’s analysis shows that Pressley performed best in precincts where young adults or people of color are most numerous. Those precincts also saw the biggest turnout increases compared to the most comparable recent election. “For example, Boston’s Ward 21, Precinct 2—home to Boston University’s Student Village—saw 400 percent more votes cast in this primary compared to four years ago, which dwarfed the median increase of 166 percent across all precincts.” 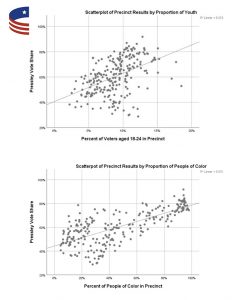 It’s true that precincts with lots of youth or people of color tend to be located in the City of Boston, where Pressley has been a councilor. So it could be that she performed best within her own jurisdiction. (She is a respected veteran elected official, even though she is sometimes portrayed simply as an insurgent.) However, she also won precincts outside of Boston that have favorable demographics.

I find it interesting that age and race/ethnicity separately predicted support for her. Or, to put it another way, she did well in student precincts that are predominantly white and upper-income as well as in low-income neighborhoods.