Kogonada’s Columbus (2017) is beautifully filmed in Columbus, IN, a small city stocked with distinguished modernist architecture. Casey (Haley Lu Richardson) had a rough adolescence, but in the midst of that turmoil, she started relishing one particular modernist structure in an ugly strip mall. (I think it is Deborah Berke’s First Financial Bank, below.) She begins to explore the history of modernist architecture and discovers a possible exit from her current life into a world of art and ideas. 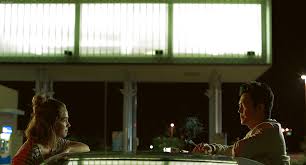 A fine modernist building is an exquisitely planned abstract design composed of a limited number of elements. So is Columbus. The patterns are “subtle” (which is the effect that Casey “goes for” when she cooks for her mom), but also pervasive. For example, Jin (John Cho) and his father are Korean or Korean-American men who form parallel friendships with Midwestern women. Jin and Haley have difficult relationships with parents of the same sex. Near the beginning, Eleanor (Parker Posey) walks across Eero Saarinen’s Miller House toward Jae Yong Lee. Near the end, Casey walks across the Miller House toward Jin. Just like Eliel Saarinen’s First Christian Church, as Casey describes it, the whole film is asymmetrical yet carefully balanced.

Jin’s father left a line-drawing in a notepad, and Jin tries to identify its subject. It could be Mill Race Park Tower by Stanley Saitowitz. Or it might represent negative space, such as the gap in the brick facade of Columbus City Hall by Skidmore, Owings and Merrill. Jin’s father, in his coma, is negative space, and the drawing he left probably does depict the gap in City Hall. But Casey doesn’t like that building, ranking it “low teens, high twenties” on her list of Columbus’ architectural monuments. She strives to bridge gaps–much like James Stewart Polshek’s Mental Health Center, which is built across Haw Creek, with the water flowing beneath for the benefit of the patients.

The film is about appreciating where you are and what you have, taking time to observe. Gabriel (Rory Culkin) even delivers an amusing speech about attention spans, ostensibly summarizing the views of a famous–but absent–critic. Everyone wants Casey to get out of Columbus and escape from her family life, but her moral excellence lies in her genuine love for both. This is not a story about a teenager who needs to break away from a small city in Indiana, but about a person who has learned to see and to love what she sees. Columbus is a lesson in both.