In an article published today (“Deliberation or Simulated Deliberation?” in Democracy and Education, 26, 1, Article 7), I respond to a valuable previous piece by Margaret S. Crocco and her colleagues, “Deliberating Public Policy Issues with Adolescents: Classroom Dynamics and Sociocultural Considerations.” These authors analyze classroom “deliberations” of current events and find disappointing results. Their analysis is rigorous and insightful. One finding particularly caught my eye.

It is interesting that even students at the school with a large immigrant population tended to talk about immigrants as “they” when they deliberated about national policy. They were essentially role-playing the government or perhaps a body of influential citizens of the United States. As Crocco and her colleagues write, “Participating in the public debate about immigration in U.S. classrooms positions one as an insider with all the privileges of excluding outsiders that result from this status” (Crocco et al., 2018). This is evidence that the students experienced the discussion as a kind of role-play.

That finding leads me to propose that discussions can vary on two dimensions. Talking can result in an actual decision, or it can be about a simulated or hypothetical decision. And the participants can either speak for themselves or role-play characters. Those distinctions produce four types, all of which can be found in actual classrooms (and in settings for adults, such as community fora.) 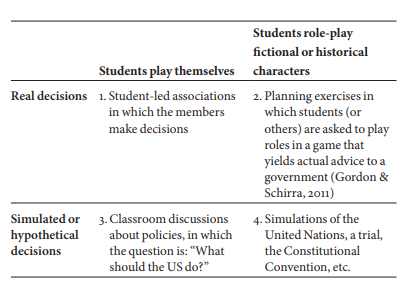 I think Crocco et al. provide some grounds for skepticism about simulated decision-making discussions in which the speakers represent themselves (cell 3). When we ask students (or adults) to discuss what “we” should do, where the “we” is actually a vast or distant entity, such as the US government, we position them as insiders even though they know they are outsiders. This disjunction could be fun or interesting, but I think often it just alienates.

The other cells are more promising. It’s better to be able to: (1) govern a real entity, such as a student-led association, (2) give advice to a real decision-maker, or (4) pretend that you hold a decision-making role, such as a Senator in a fictional Congress.

There are benign reasons to turn national issues into topics for small-group discussions. The goal is to make students (or others) feel that the government is theirs. It does belong to them, as a matter of justice, and it’s great if they take away that feeling. But we must be serious about their limited power, or they will perceive the discussion as fake and perhaps draw the conclusion that democracy is fundamentally a false promise. As I write in the article:

The students in these three classes did not actually decide about immigration. At most, they might shift their individual opinions on that topic, and if they encouraged others outside the class to change their opinions in similar ways, that could possibly affect national policy by influencing those people’s votes. But that is a remote form of impact for any citizen to consider, and especially for students who are not old enough to vote themselves. The United States is an “Imagined Community” (Anderson, 1991), not a group of people who literally make decisions. The real group—a classroom full of students—was pretending to deliberate.

That is how I would explain why the results were disappointing.