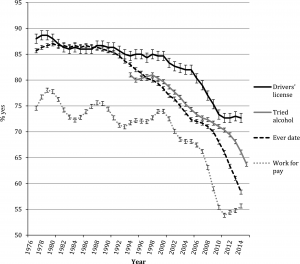 A new paper by Jean Twenge and Heejung Park (2017) is getting a lot of coverage. The main finding is a delay in the onset of certain activities traditionally defined as “adult.” This graph shows the trends in having a driver’s license, drinking alcohol (ever), dating, and working for pay–all down steeply for teenagers.

Twenge and Park find that these trends are parallel for different racial and economic groups. They also find that adolescents simply go outside their homes without their parents much less often than their predecessors did.

These data jibe with my observations teaching college and raising kids (and observing their cohorts) for 25 years. But I would have strongly surmised that my observations had a class bias. I would have explained the delay in adult activities as a result of increasing investments in children by parents who have assets to invest. American parents spend an average of $38,000 per child while their children are between the ages of 18 and 34 (Furstenberg, Rumbaut, Settersten 2005). That statistic conceals huge differences by social class. Some young people are rationally delaying their careers and the formation of their families while they accumulate human capital, thanks to their parents. Other people are on their own at age 15.

This graph, from Kei Kawashima-Ginsberg’s paper on extracurricular activities, shows a widening disparity in the sheer cash invested in organized activities.

Another reason to hypothesize a growing gap in the onset of adulthood by social class is Annette Lareau’s finding (ca. 2003) that middle-class American parents use a strategy of “concerted cultivation”–viewing childhood as an opportunity to develop human capital–while working-class parents prefer “the accomplishment of natural growth,” or letting kids be kids. One reason that middle-class and affluent American teenagers don’t spend much time away from their parents is that their parents are now providing “concerted cultivation” in the form of paid after-school activities, supervised homework, intentional conversations about valuable topics, etc. Meanwhile, the working class are trying to let their kids enjoy some freedom before they have to get jobs.

Given these prior assumptions, this is my biggest surprise in the Twenge and Park article: the lack of difference in rates of “adult” activities by social class. Here I graph the data in their Table 2. 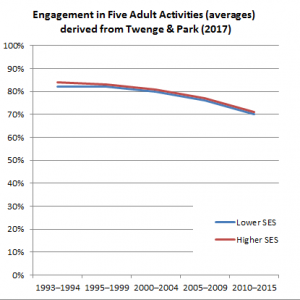 See also: the changing transition to adulthood; coming of age in your thirties; Generation Me?