does the UK election show a return to two-party rule?

A May 2016 article in the Financial Times was headlined, “British politics has broken out of the two-party system.” The lead explains:

Politics has fragmented. London’s choice of Sadiq Khan as mayor grabbed the headlines — and rightly so. But the local and regional elections across the UK carried a broader message. British politics has broken out of the familiar framework of the two-party system. As in much of the rest of Europe the old rules are being discarded.

Provisionally, it seems the 2017 election results tell the opposite story. Here’s a hypothesis about what happened in Britain last week: 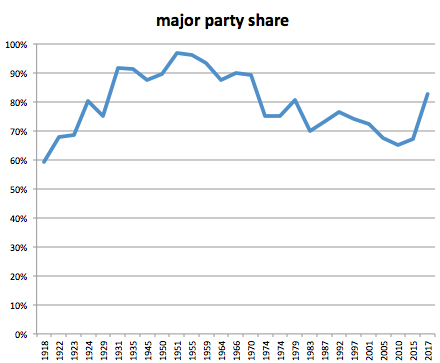 This second graph breaks it down by party: 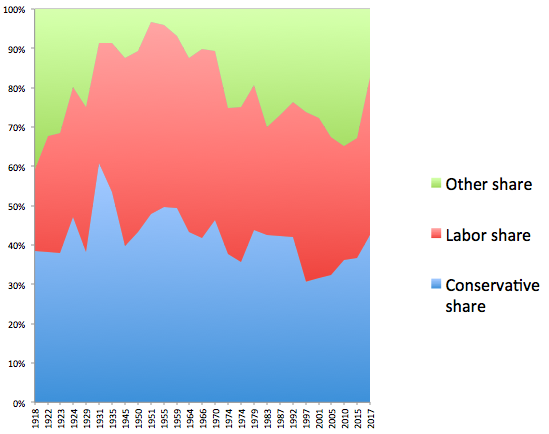 Sources: The Guardian for the 2017 vote tallies so far. The UK Electoral Commission for historic data. Analysis is my own.

Associate Dean for Research and the Lincoln Filene Professor of Citizenship and Public Affairs at Tufts University's Tisch College of Civic Life. Concerned about civic education, civic engagement, and democratic reform in the United States and elsewhere.
View all posts by Peter →
This entry was posted in democratic reform overseas, Uncategorized. Bookmark the permalink.