There’s lots of conversation right now about Donald Trump’s mental condition. It includes claims that he demonstrates narcissistic personality disorder and that changes in his speech patterns reveal cognitive decline. I [analyzed] his speech pattern from a particular angle here. 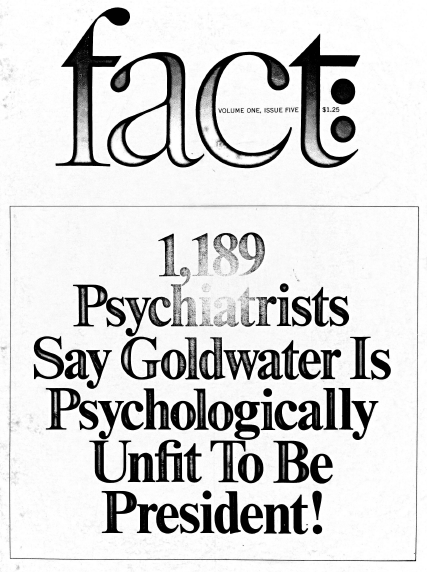 This discussion evokes the episode in 1964, when Fact magazine surveyed psychiatrists about then-candidate Barry Goldwater’s psychological fitness to be president.

Just under half (49.2%) of the 2,417 respondents thought he was unfit, with the rest split evenly between those who didn’t believe they could answer and those who considered him fit for office. Fact also gave respondents a chance to write comments and printed 40 pages of quotes from their answers. Goldwater sued and won over $1 million in damages (which bankrupted Fact magazine), leading to the American Psychiatric Association’s “Goldwater Rule,” which forbids members from making evaluative comments about public figures whom they have not examined as individual patients. A patient/physician relationship triggers ethical responsibilities that are absent when psychiatrists discuss public officials.

For me, the original Fact magazine issue is a fascinating example of professional authority encountering politics. It’s important to note that a considerable minority of the quoted statements either object to psychoanalyzing Goldwater without examining him in person or vouch for his mental health. Some of the surveyed psychiatrists even opine that he is the only sane candidate, surrounded by crazy socialists. But the majority of the quoted MDs make claims that now seem risibly dated and morally problematic. They do so under their professional titles, in a magazine entitled “Fact.” For example:

I think we should talk about Donald J. Trump’s character and psychological fitness for office. It seems problematic to use the Goldwater Rule to keep the whole psychiatric profession out of this discussion. And yet these quotes from 1964 remind us how historically-relative, value-laden, and agenda-driven people can be, even when they present themselves as scientific specialists dealing only in Facts.