Whether you’re building a social movement, organization, network, or media platform, you should strive for SPUD:

Scale: You need a lot of people. For instance, if your social movement is anti-Trump, it must include 55% of all voting Americans in 2018 to have a chance of capturing the House. (Note that this is entirely possible. Joshua Spivak cites 1894 and 1994 as “among the two most important midterm elections in American history.” Both “came two years after one party won a seemingly sweeping mandate for power. Both saw historic reversals. And, perhaps more importantly, both completely reshaped the political landscape for decades to come.” Trump’s 2016 victory could be monumentally Pyrrhic–but only if the opposition attains sufficient scale to reverse it).

Pluralism: Your organization, movement, or platform must incorporate a plurality of perspectives. The criterion is not whether it represents the opinions of the American people as a whole. We are entitled to build groups that tilt one way or another; that’s what politics is about. But ideologically homogeneous groups make stupid choices. They also limit their own scale because they forget how many people disagree with their premises. Ideological homogeneity and narrowness are dangers on the left as well as on the right.

Unity: Groups are more effective when they can present a united front. We march together, sing the same anthem, or use the same hashtag to display unity. Standing together compels respect. Groups also need actual unity so that they can develop agendas and coordinate their resources and actions to accomplish their goals. Compromise is an inevitable aspect of politics, but groups that lack unity can’t negotiate effectively when it comes time to compromise.

Depth: Valuable political organizations change their participants. Truly engaged members learn skills and information, gain agency and purpose, develop allies, and (in the best cases) make their own goals more responsible and ethical by participating in groups. Both political outcomes and the quality of our civic life depend on who develops in these ways.

The SPUD values conflict. Groups with larger scale struggle to provide depth: transformative experiences for their members. But groups that really change lives struggle to reach large scale. Even more obviously, pluralism conflicts with unity. Supporters of Hillary Clinton, Bernie Sanders, Black Lives Matter, and #NeverTrump disagree about fundamental matters right now, and that is causing a lot of angst. A cheap consensus would reduce pluralism, but deep and continuous disagreements will block unity. 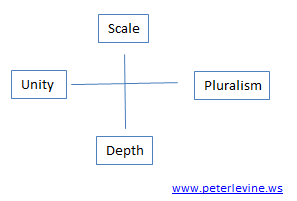 Despite these tradeoffs and tensions, groups and movements achieve more or less SPUD. There is such a thing as populist pluralism the treats the people as highly diverse and yet united in the common interest. This is an essential antidote to Trumpian populism, which depicts the people as homogeneous and represented by a single leader. It takes work to grow large and go deep, to encourage pluralism and build unity. It would sound utopian except that it’s exactly what our best organizations and movements accomplish. And it suggests a diagnostic checklist for any group, institution, or network you’re part of. How are you doing on each dimension of SPUD?