When CIRCLE’s Millennial survey was conducted (9/21-10/3), Clinton was beating Trump by 21 points (49% vs. 28%). Clinton may do better when the actual votes are cast, because there seems to be a trend in her favor among youth. That said, the CIRCLE poll allows detailed comparisons between young Americans who were favoring the two candidates at a moment when Trump was drawing one in four.

Young Trump and Clinton voters were starkly different people, and today CIRCLE has published an analysis that compares them by demographics and by opinions. For example, this graph shows Trump winning a plurality of non-college-educated men under 30 even as he was losing college-educated young women by almost 2-to-1. 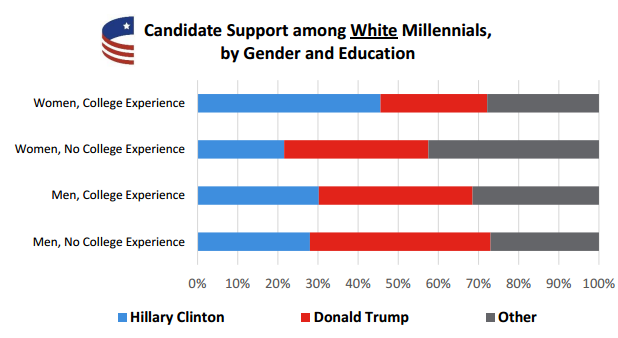 A couple of other illustrative findings from the report, which deserves to be read in full: