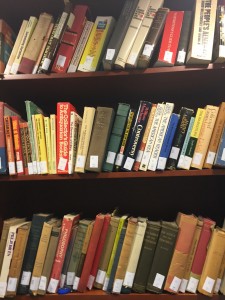 This is part of the library of Albert Shanker (1928-77), which lines the walls of the conference room of the Albert Shanker Institute, which is inside the American Federation of Teachers’ Building in Washington. I was there earlier today. It seems fitting that such a library should rest in the heart of the AFT, exemplifying the long, rich, and living tradition of intellectual life within the labor movement (and—importantly—outside of universities).

The collection itself reflects a mid-20th century canon. There are books on Freud and idealist philosophers like Collingwood and Croce, as well as pragmatists like John Dewey, who was a founder of the AFT. There are many books about schooling and education, from a variety of perspectives. Several thousand volumes line the shelves.

Shanker was a highly controversial figure. In “Sleeper” (1977), Woody Allen’s character awakens 200 years after being cryogenically frozen and asks what happened to civilization. He’s told that a man called Al Shanker got hold of nuclear weapons. On issues of unionism, race, school choice, and foreign policy, Shanker made many enemies as well as friends, and probably deserved some of both. I don’t really know the whole story well enough to praise or bury him. I take the library more as a monument to the intellectual life of our unions, which is something to prize when they are under such threat.