I’ve been blogging since January 2003–for 13 years. I usually note the anniversary with a post about the past year. This year I will illustrate the blogaversary with a screenshot (thanks to the Internet Archive) of the blog as it looked on February 4, 2003: 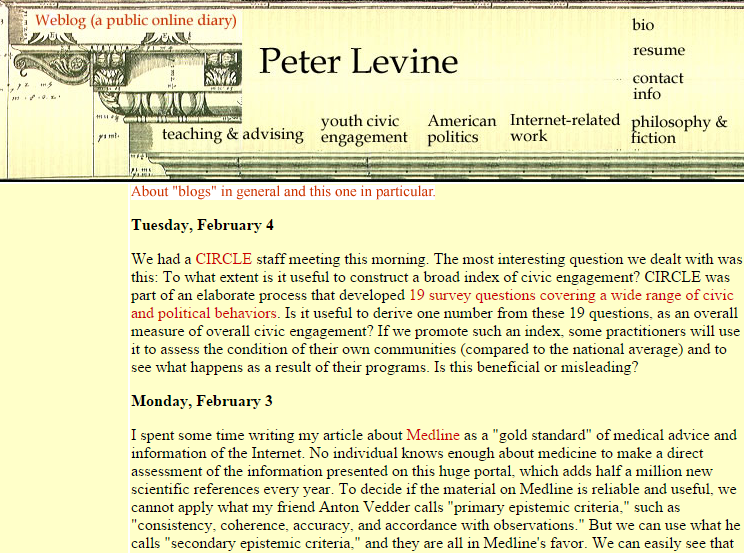 The text in those days was simple HTML. In other words, this site was not a database of posts that automatically generated a “front end” view for the reader (as it is now). Back then, I just typed each new entry on top of the previous one. Because blogging was still fairly new, I felt the need to explain at the top of the page that a Weblog was a “public online diary” and I included a link to a statement about “‘blogs’ in general and this one in particular.” I put the word “blog” in quotation marks because it was unfamiliar. In keeping with my definition, I did in fact write a kind of diary. The intro to each of the posts you see above was about what I had done during that day, hooked to some kind of substantive point.

On Feb. 4, 2003, we seem to have talked about creating a “broad index of civic engagement.” The fruits of that discussion include the Civic Health Index, led by the National Conference on Citizenship, which was written into federal law as part of the Kennedy Serve America Act of 2009. We’ve been involved in countless other measurement efforts since then.

The Feb. 3 post is about a form of literacy (in this case, medical literacy) and whether to promote it with better free electronic resources or with public schooling–or both. Even now, in our world of social media, these issues remain important and difficult. I continue to resist piling all responsibilities for boosting every form of “literacy” onto our public schools. I also continue to think that sometimes we can lower the cognitive demands on citizens by simplifying systems, rather than trying to feed everyone ever more information. That strategy seems appealing for law and policy as for medicine and health.

Flashing forward to 2015 (3,119 posts later) … I think the past year was fairly typical, although I intentionally let slip my traditional obsession with posting every single workday. Nowadays, this is not a diary so much as a notebook of argumentative writing, a fair amount of which ends up in articles. For better or worse, the categories that interest me remain basically the same as they were more than a decade ago.