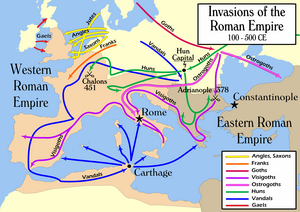 (New York) This is a classic map of the “barbarian invasions,” taken from Wikipedia. I certainly grew up looking at maps like these. The story they illustrate goes like this. First, there was a Roman Empire with armed borders all around the periphery of the Mediterranean. Inside its borders, the people were Romans who spoke Latin and/or Greek and were ruled from Rome. Beyond were barbarian peoples who behaved very differently. At a certain point, the borders collapsed and various barbarian peoples swept in, taking up residence in portions of the former Empire. They brought new languages, myths, and cultures with them. Their descendants still constitute the majority populations of most parts of Europe, North Africa, and the Levant to this day. The newcomers ceased to be barbarians once they stopped moving, because then missionaries were able to radiate back out from Rome and Constantinople to teach them Christianity, Latin and/or Greek, and other elements of ancient civilization.

I had already begun to realize from various scraps of evidence (even including news reports of genetic data) that this model was quite wrong. Now reading Peter Brown’s brilliant book The Rise of Western Christendom, I understand the current synthesis. It denies that there were vast movements of peoples from one place to another around the time the Roman Empire ended. Rather, the population within and around the territory of the old official Empire went through a series of cultural, political, and economic changes until the Imperial system was gone. These changes often germinated within the borders rather than coming from outside. People who were, in some important sense, Romans turned (over the course of several generations) into people who thought of themselves as Franks or Bulgarians.

To elaborate a bit: The Roman Empire was always much more culturally and linguistically diverse than I was taught in grade school, and much more loosely governed. Local elites always ran things in their own ways. Brown notes that even though Egypt was a crucial province that encompassed one of the biggest cities in the world, Rome posted only one official there per 10,000 residents. Egyptians governed Egypt. The official borders made little difference, since the culture, economy, and political order on both sides was just about the same. However, the Empire was important economically because it taxed everyone within its borders and used the proceeds for armies and official building programs (both of which also enriched an upper class). When the Empire lost its taxing capacity, that changed the flow of goods and greatly reduced levels of construction and production.

The Empire was also important culturally because it offered a set of ideas that could be used by local elites. Among these ideas: Rome was the center of the world (urbs et orbis), the Emperor was the most powerful mortal of the day, Latin was the language of law, and there was a difference between Roman subjects/citizens and barbarians. Those ideas were never exactly true or false—they were closer to orienting value judgments. Over time, they lost their force, and then the same elites who had governed as Romans started to govern as, for instance, Franks. In place of stories about Rome, they started to tell mythical stories about their ancestors’ migrations from primordial homelands beyond the old borders, and those myths continue to influence Europeans to this day.

Meanwhile, profound changes in culture and behavior developed within the Empire. For instance, in the third and fourth centuries, civil wars were almost constant. They were fought by soldiers who pledged personal loyalty to leaders (claimants to the Imperial throne) and moved around regions like northern Italy and the Balkans, often pillaging. They dressed increasingly in ways that we associate with the “Dark Ages.” Brown says these soldiers wore “Embroidered trousers, great swinging cloaks, large gold brooches, and heavy belt-buckles.” They probably spoke various languages other than Latin. We might once have viewed them as barbarians who had somehow come inside the frontiers of the Empire and threatened its security. But a better theory is that they were Roman soldiers who were gradually developing the organization, behavior, and even dress that we associate with the post-Roman era. That is a great example of the new synthesis.

Associate Dean for Research and the Lincoln Filene Professor of Citizenship and Public Affairs at Tufts University's Tisch College of Civic Life. Concerned about civic education, civic engagement, and democratic reform in the United States and elsewhere.
View all posts by Peter →
This entry was posted in Uncategorized. Bookmark the permalink.