This is a page from the 2013-14 Rector’s Report of the Ukrainian Catholic University in Lviv, an institution that I visited this summer. (Click the image to open the PDF.) The page is headed “A Revolution of Dignity,” and it describes various political–even revolutionary–activities by the university or its members. The next page shows profiles of activists from the university, including a lecturer who was shot to death. It is an interesting combination of American-style glossy PR and strongly worded political commitment. 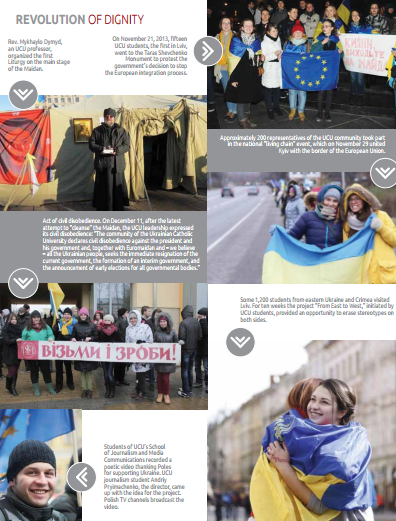 I would not hope for a comparable stance from an American university. For one thing, this brochure comes from a country with a war on its own territory and ongoing political crises. We shouldn’t wish for that level of strife here, even if it elicited more political commitment from higher education.

Besides, one can critically assess the position that the university has taken. I’m on the same side, but this position is debatable. Universities contribute to the public discussion by being fair and open to a range of perspectives and by demanding standards of evidence and reason from all participants. When a university commits itself strongly to a cause, it can undermine its ability to be an open forum for debate. It also acquires strange bedfellows–people on the same general side of the political issue who may be quite unsavory.

On the other hand, neutrality is impossible and is the wrong objective. Universities exist to promote free thought and substantive dialog and inquiry, which are incompatible with censorship, oppression, violence, and rampant corruption. Scholars also need intellectual freedom and public support in order to do their work. So universities are closely tied to social justice. They must leave space for a debate about what defines social justice, but they should not pretend that it is other people’s business.

US universities tend to respond to political threats and crises by staying clear of them, at least as official institutions. The Ukrainian Catholic University demonstrates what it looks like when an institution leaps into the fray. The Rector writes in his introductory message “we declared civil disobedience against the government and the president,” which is not what you’d expect in an annual report from a US college or university. He adds:

It’s difficult to summarize the last year, for most of the processes have only begun and are now continuing. We are still experiencing the ‘Revolution of Dignity.’ We are still fighting an external aggressor and internal problems. … From the first days of the revolution we clearly understood what we were fighting for. We were not distracted from running the university for a second. But we also supported our students. …  On December 11 we declared civil disobedience against the government and the president, who used violence against his own people. ….

We should work for victory and for reconciliation. Our weapons are truth and peace. We should already be thinking about what will happen after the war, how to heal physical and spiritual wounds, how to strengthen the country. In addition to the external enemy, Ukrainians need to conquer internal enemies: corruption, anger, hatred. I expect that the spiritual and educational life of the university will help our students handle these challenges.