You’d swear that progressives have a quota for the phrase “white male.” It’s like their Benghazi.

According to the Exit Polls, 64% of white people without college educations, and also 64% of white men, voted Republican in this year’s House races. The Democrats performed better among white college graduates and much better among people of color. This is why so many progressives are fretting about the Republicans’ hold on the white working class.

Considering the 40-point difference in party choice between working-class white people and working-class people of color, race is obviously relevant. A partial explanation of the election results may be racial antipathy toward the president and toward government, seen as biased in favor of “minorities.”

Further, enormous amounts of money and effort have been spent to delegitimize government–to persuade citizens that it can do nothing good–whereas in fact programs like Medicare are strikingly efficient and beneficial.

But neither comes close to a complete explanation. The deeper problem (as authors like Harold Meyerson and Dean Baker argue), is that Democrats do not offer solutions to the actual problems of the working class. They have something to say to workers who face discrimination on the basis of race or gender: hence their stronger performance among women and people of color. They also favor somewhat stronger welfare policies and, indeed, won voters with family incomes below $30,000 by 20 points. But when it comes to the economic concerns of the working class, they’ve got nothing.

It used to be the case that a person without a college degree could find secure, remunerative, valued, and valuable work in a farm or a factory. But agricultural and manufacturing jobs have been disappearing–not cyclically in recessions but gradually and inexorably:

Those trends would be fine if former factory workers and farmers were now employed in secure, interesting, and well-paid service jobs, but we all know that is not the case, and the decline in real family incomes shows what has really happened: 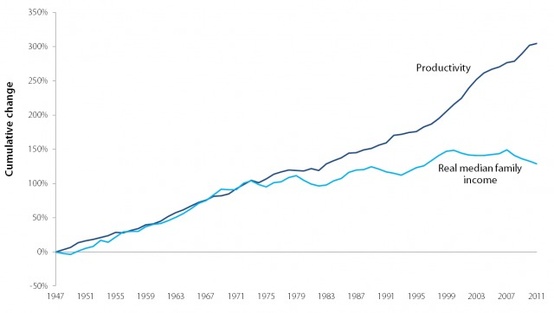 Baker says, “There is no shortage of policies that the Democrats could be pushing which would help ordinary workers.” Maybe, but I see difficulties–not only with the policies but also with their political impact.

Keynesian macroeconomic policy would help in recessions (and we didn’t get much of it in 2008-10 because states cut their budgets), but expansionary fiscal and monetary policy cannot stop or reverse long-term de-industrialization. Baker writes, “No one in either party has any proposal that will make more than a marginal difference in the productivity of the U.S. economy any time in the near future.”

Better education (if we knew how to deliver it) would prepare the next generation for a competitive, global, post-industrial labor market, but it would offer nothing to today’s 50-year-old.

Taxing and spending does no good unless the spending buys something that benefits that 50-year-old, and what he wants is a sense of economic contribution and importance. Being on the receiving end of a social problem cannot address that need. I would defend smart welfare programs against critics who think they inevitably create “dependency.” If you are in poverty, money can help you. But if you are stuck in an unsatisfactory job, welfare is not what you want. On the contrary, the government takes at least some of your income and spends it on other people. Government doesn’t look like a real or potential solution to your problems.

Reporting from Maryland, Alec MacGillis writes, “The voters I spoke with all said their own economic situations were basically stable and better than they were a few years ago, but they nonetheless felt as if the state of affairs was not where it should be. Eline, the university pest-control worker, has a secure job and is close to retiring, but as someone whose ancestors worked at the shuttered Sparrows Point steel plant, he worries about the decline of industry in Maryland, and sees [Republican candidate Larry] Hogan as more likely to do something to address that.” [As I note in We are the Ones, Sparrow Point used to employ 30,000 men.]

In years with higher turnout, the Democrats are bailed out by groups such as environmentalists, secular social libertarians, and people who may need protection against discrimination. In 2012, Obama won 76% of voters who described themselves as gay, 55% of people with postgraduate educations, and 96% of Black women (for example). But he lost 61% of whites between the ages of 45 and 64, and 53% of adults who had only high school diplomas. When turnout fell in 2o14, Democrats were left high and dry.

Bill Clinton did somewhat better among working-class whites, but we were then 20 years earlier in the process of deindustrialization to which Democrats (including Clinton) have had no serious response. In 1996, a Democratic administration could still get away with delivering fairly decent macroeconomic performance. It’s too late for that now.

I’m certainly not suggesting that we give up on using policy to assist working people of all races. Assisting them is a question of justice as well as political expediency. But it won’t be easy, and we’re not seeing anything plausible yet. As Meyerson writes,

But the Democrats’ failure isn’t just the result of Republican negativity. It’s also intellectual and ideological. What, besides raising the minimum wage, do the Democrats propose to do about the shift in income from wages to profits, from labor to capital, from the 99 percent to the 1 percent? How do they deliver for an embattled middle class in a globalized, de-unionized, far-from-full-employment economy, where workers have lost the power they once wielded to ensure a more equitable distribution of income and wealth? What Democrat, besides Elizabeth Warren, campaigned this year to diminish the sway of the banks? Who proposed policies that would give workers the power to win more stable employment and higher incomes, not just at the level of the minimum wage but across the economic spectrum?