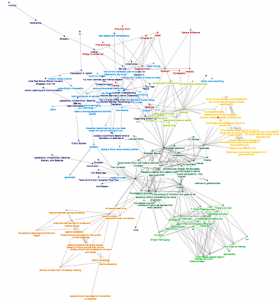 My undergraduate students have identified their own most significant moral ideas and commitments and the important connections among them. The image above shows the networks that have resulted so far–with each student colored differently, and each idea shown as shared if two or more students held it. Today, students are pairing up to explain their moral networks and will adjust their own maps if their partners propose persuasive ideas (or remind them of any ideas they forgot). I anticipate that the class map will become a tighter network as a result.

As I briefly explained in class, a network is a model that can be used to describe anyone’s moral thought. The nodes are ideas; the links are various kinds of connections. That people have moral networks is not a theory that could be found true or false. Rather, a network is a tool for visualizing how anyone thinks.

Often, when we try to improve our moral thought, we seek a systematic philosophy or theology. At any rate, systems (such as Kantianism, utilitarianism, or the classical Hinduism of the Bhagavad Gita) are what we most often teach in courses on philosophy and religion.

Any system organizes the whole network in some way. For instance, the system may assert that there is one highest good (very general and abstract) that should imply all the other ideas on our map. Or the system may offer an algorithm for determining which ideas belong and which ones trump other ones.

If a moral system is valid, then an individual can relate directly to it. You can adopt it as your network. You don’t need other people to help apply the system to your own life.

If you can make a moral system work, that’s fine. But I find that almost all reflective people are not systematic; they have lots of related ideas without a coherent structure. (The same has also been found by some psychologists and sociologists.) This is even true of very religious people. They may assert that God knows one organized structure or even the God holds just one idea. But we can’t know it. We humans must hold lots of different beliefs, values, stories, heroes, etc.–closely connected but not reducible to a system.

If we can’t adopt a system, the other way to improve is constantly to reflect on and revise our own networks. This is more like gardening than architecture. You start with what’s already growing, and you trim, weed, and plant one idea at a time. That process requires other people because we need their perspectives and experiences to provide ideas and to check our own biases. We can expect that our moral network will be dynamic and somewhat situational. (We’ll have different ideas in different contexts.)

At times in the history of thought, systematic moral theories have been dominant. But those moments have alternated with times when many of the leading thinkers just can’t assent to the available systems. They instead offer techniques for moral reflection and self-improvement (a.k.a. moral therapy, or moral hygiene). For instance, the systematic moment of Plato and Aristotle gave way to Stoicism, Epicureanism, and Skepticism, which are all about techniques of self-improvement. The high point of medieval Catholic systematic theology gave way to Renaissance essayists like Montaigne. The era of Kant and Hegel gave way to Emerson and Nietzsche. I think the same alternation has occurred in Eastern thought as well.

The thinkers who teach methods of continuous moral improvement vary a great deal, but I find a very frequent return to three fundamental criteria, each in tension with the other two: 1) truth, or at least the avoidance of error; 2) community or justice; and 3) happiness or inner peace. For instance, those are the three criteria in Greco-Roman thought after Aristotle. Rabbi Shimon ben Gamliel, a rabbi of about the same time, is supposed to have said: “On three things the world stands: justice, truth, and peace.” In Buddhism, the Three Jewels are Buddha (freedom from suffering), dharma (law—but in Buddhism, it often means truth), and sangha (community).

And that is why I am interested in putting people into dialogue with each other about their moral networks and asking them to reflect on whether their networks are compatible with truth, community, and happiness.