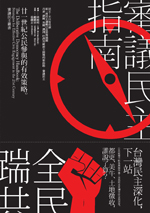 This is the cover of the Deliberative Democracy Handbook, edited by John Gastil and me, in Chinese. It was published in Taiwan, and the back cover says (according to Google’s translation, as edited by me):

“Twenty years after the lifting of martial law, we are still on the bumpy road to democracy. We  need to reconstruct the relationship between citizens and the state and think about more possibilities for citizens to participate. This book will open our imagination to democratic deepening. “- Tie-chi (political commentator) …

Let people who hold different beliefs and values be in dialogue– from listening to the formation of consensus–and produce better, more specific and viable policy options. The new global wave of democratic reform, “deliberative democracy,” is breaking through the dilemmas of democracy in advanced countries such as Denmark, Germany, the United States, Australia, and Brazil.

It’s interesting that the cover shows a fist, whereas the English-language version shows hands clasping in agreement. I like the confrontational imagery of the Taiwanese edition–for even deliberative forms of democracy involve power. (A Japanese edition is in progress as well.)