Today, I will be interviewing John Gaventa at a Tisch College forum to which all are welcome. Gaventa has been a major figure in democracy and popular education since his student days in the early 1970s. One of his recent contributions is the PowerCube, a simple device that activists can use for analysis and planning: 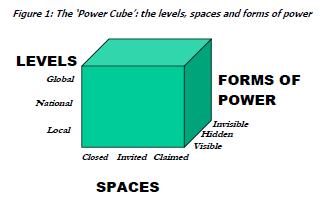 I am especially interested in the dimension that runs from “closed” to “invited” to “claimed.” Much of my work has involved trying to get powerful institutions to “invite” public participation by, for example, reforming elections to make them more fair, enhancing civic education, advocating changes in journalism, or recruiting citizens to deliberate about public policy. Increasingly, I believe that democratic processes must be claimed, not invited, if they are to be valid and sustainable.

For instance, in 2009, angry opponents of health care reform deliberately disrupted open “town meetings” convened by Democratic Members of Congress. The Stanford political scientist James Fishkin published an argument for randomly selecting citizens to discuss health care instead of holding such open forums. That was a classic proposal for “invited” democracy. The New York Times chose to give his essay the headline, “Town Halls by Invitation.” I would now say that democratic participation cannot be by invitation–it must be a right claimed or created by ordinary people, whether elites like it or not.

On the other hand, when officials do invite participation, that is often in response to public pressure or demand. In such cases, formally “invited” spaces are actually claimed ones. One of the most important innovations is Participatory Budgeting (PB). As I understand it, the Labor government of Porto Allegre, Brazil, invented PB to reduce political pressure on itself as it faced hard budget choices. But PB became so popular that it survived changes of party control in Porto Allegre and spread to many other municipalities around the world. In such cases, reform begins with an invitation but becomes an expectation.