My post from 2005 on Las Meninas, Velazquez’ masterpiece, has drawn some very interesting and original comments. The latest contribution comes from Barbara Robinson of London Ireland who, like Colin Dixon, believes that the whole painting is a mirror image. Ms. Robinson adds some evidence. These two paintings are both by Velazquez and they show the same girl, the Infanta Margarita, three years apart. The image on the right is a detail from Las Meninas; the one on the left is part of a freestanding portrait. 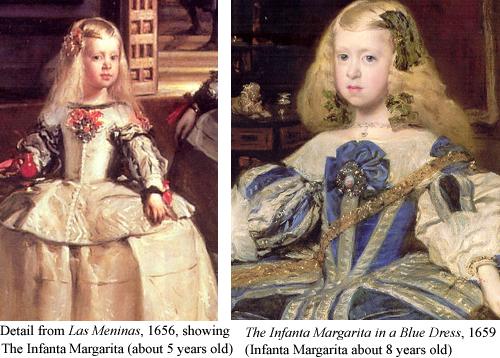 Barbara Robinson (who sent me these images) emphasizes the parting of the hair and “the decorative hair slide,” which are reversed in these two pictures. Her son adds that if Las Meninas is an image in a mirror, then Velazquez is shown holding his paintbrush in his left hand, which makes him what we Americans call a “southpaw.” (Note that there were very large mirrors in Valazquez’ day.)

1 thought on “was Velazquez left-handed?”